Items related to Alkali Trails: Social and Economic Movements of the... 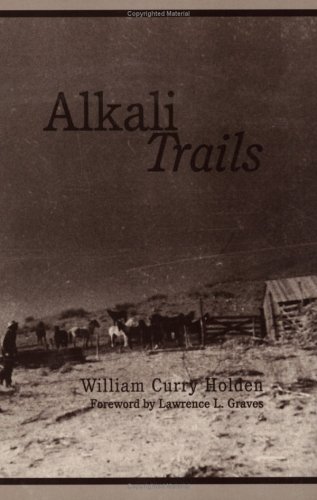 For much of the first half century after statehood, West Texas remained a frontier wilderness and—unlike the expanding cities in East and Central Texas—sparsely populated with Anglo-American settlements. The scarce rainfalls, freezing blue northers, dusty winds, and scorching heat waves dissuaded many Texans from homesteading west of the U.S. Army's frontier fort system. For decades, only the hardiest attempted to forge their brand of civilization on the West Texas plains. Those who endured faced considerable difficulties in providing for themselves and their families. Many abandoned their homesteads in favor of larger, eastern towns where livelihoods were not so tenuous and the environment not so daunting. Yet as the nineteenth century advanced, so did the westward line of settlement. Cattle ranching ensured the rise of schools, churches, and towns as the great ranches of West Texas fed the nation's ever-growing demand for beef."Indispensable to students of Texas history and invaluable to those interested in the general social aspects of the vast subhumid region of the United States."—Walter Prescott Webb