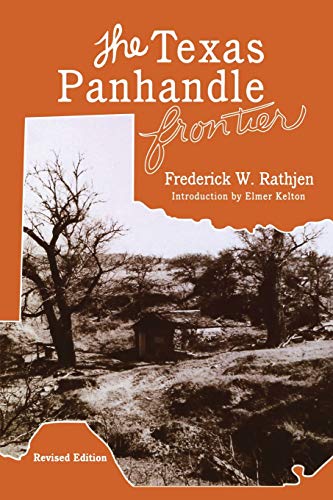 "An outstanding contribution to the historiography of the American West and likely will remain for a long time the definitive work on the Texas Panhandle."―Ernest Wallace

"As one born in the region, Rathjen is sympathetic to it, but he is also understanding of it; there is little Chamber of Commerce stuff in his story." ―Robert G. Athearn

The Texas Panhandle―its eastern edge descending sharply from the plains into the canyons of Palo Duro, Tule, Quitaque, Casa Blanca, and Yellow House―is as rich in history as it is in natural beauty. Long considered a crossroads of ancient civilizations, the twenty-six northernmost Texas counties lie on the southern reaches of the Great Plains, where numerous dry creek beds and the Canadian River have carved the region appropriately named the High Plains.

Through these plains and their canyons, ancient peoples trailed game for the hunt. The Panhandle provided choice grazing lands for bison, and as the region became more familiar to ancient tribes, semipermanent camps marked the landscape. Yet when Coronado's conquistadores crossed the High Plains in search of fabled wealth and found sun-baked adobe instead of gold, they declared the region a wasteland. Likewise, the Republic of Texas found little use for their vast plains land―considering settlement of the frontier far too dangerous. Not until the late-nineteenth century, as the U.S. Army waged war on the Comanches, Kiowas, and Cheyennes who lived there, did Panhandle tracts of frontier open to hard-bitten settlers who had to prove themselves as indomitable as they were land hungry.

Departing from the premise that the Panhandle frontier "is but a brush stroke on . . . [the] much larger canvas" of previous frontier histories, Rathjen challenges the work of Frederick Jackson Turner and Walter Prescott Webb, and proves that regional is by no means synonymous with provincial.

9. THE TEXAS PANHANDLE FRONTIER (RE