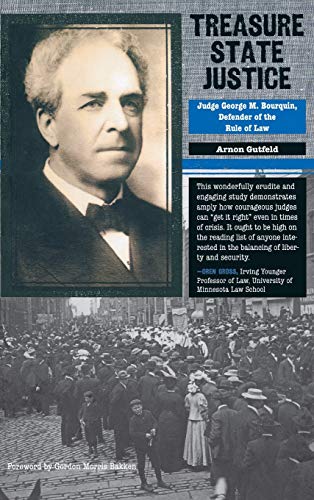 Few works reveal anything about the role of federal judges in the early twentieth-century American West. Arnon Gutfeld fills that void by analyzing the major issues and dilemmas those judges faced as the West moved rapidly from frontier justice to twentieth-century legal realities. George M. Bourquin served as Federal District judge in Montana from 1912 to 1934. He dared to issue rulings that captured national attention and aroused the ire of the Department of Justice. During the mass fear and hysteria of World War I and the Red Scare, he was one of very few judges to defend individual liberty. His decision in the Ves Hall Case elicited a knee-jerk reaction from Washington--the notorious Anti-Sedition Act of 1918.
A Jeffersonian conservative-libertarian—in the tradition of Edmund Burke—Bourquin believed the Constitution to be the sole barrier between civilization and barbarism. Especially important were his decisions in labor, Native American, and immigration issues.
Coinciding with the federal government’s largest role over the destiny of the American West, Bourquin’s judicial career provides a unique opportunity to examine the great impact that the legal system and a very unusual judge had in the post-territorial frontier period.

A native of Israel, Arnon Gutfeld was educated in the United States. For four decades he taught American history at Tel-Aviv University. He is currently the chair of the political science department at the Valley of Jezreel College.

This analysis of Federal District Judge George M. Bourquin of Montana adds to the growing literature on federal judges, puts a face on federal justice in Montana, and enriches our understanding of the breadth of impact federal justice had in the American West.
—Gordon Morris Bakken, from the foreword