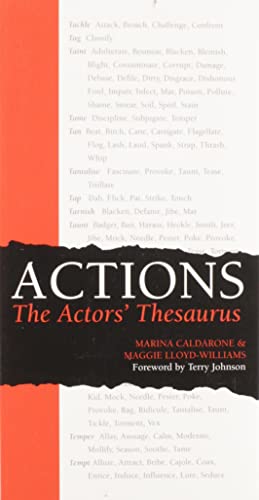 An essential companion for actors in rehearsal - a thesaurus of action words to revitalize performance.

This new book just released by Drama Publishers gathers together -- for the first time -- the acting community’s –- formerly — secret lists of action words and makes them available in an organized and comprehensive format.

ACTIONS is primarily for actors:
for established professionals and beginners alike;
for students or amateur actors;
for those with training and those without.

ACTIONS can also be useful:
for music theatre performers;
for actors wrestling with audition speeches;
for those who have to breathe life into a one-dimensional television or radio commercial;
or for those who have been performing a play for months and need to reinvigorate their performance.