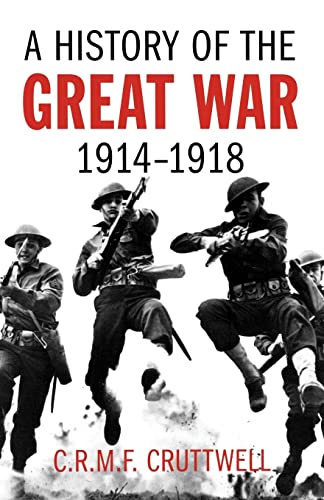 This vivid, detailed history of World War I presents the general reader with an accurate and readable account of the campaigns and battles, along with brilliant portraits of the leaders and generals of all countries involved. Scrupulously fair, praising and blaming friend and enemy as circumstances demand, this has become established as the classic account of the first world-wide war.

Since its first publication in 1934, C.R.M.F. Cruttwell’s A History of the Great War has been considered the classic account of the First World War.

The author’s experiences as an infantry officer in France and later as an intelligence officer at the British War Office gave him a front-row seat to the conflict, which he describes with exemplary objectivity and reason. His history remains invaluable for its unique, detailed understanding of the causes and consequences of the war by one who lived through it.

Crutwell’s narrative begins with the rise of nationalism in Europe, and ends with the fall of Constantinople to Allied forces, documenting not only battles, advances and retreats, but also the singular individuals who influenced the war’s outcome. His prose is vivid and unsentimental, at times critical, and always loyal to the facts and events he witnessed during the “war to end all wars.”

The author’s concluding remarks on the nature of the war, written before the hegemonic rise of the United States, are chilling and interesting in light of current events: “War between great states, equipped with all the resources of science, cannot now be regarded as ‘an instrument of policy,’” he writes. “It becomes inevitably a struggle for existence, in which no limit can be placed on the expenditure of men and money . . . [the War’s] object became not merely to destroy the armed forces of the belligerents . . . but also to break the war-will of the peoples . . . in the latter states of the war the desire to make intolerable the lives of all enemies, without distinction of age and sex, was limited only by the capacity of fulfillment.”

Mr. Cruttwell served in France as an Officer in the 1st/4th Royal Berkshire Regiment, and later as an Intelligence Officer at the War Office. He was also Principal of Herford College, Oxford, from 1930 to 1939 and was formerly a Fellow of All Souls College, Oxford. He died in 1942.