Items related to Thunderbolt: Out of the Blue: Memoirs of a World War...

Thunderbolt: Out of the Blue: Memoirs of a World War II Fighter Pilot 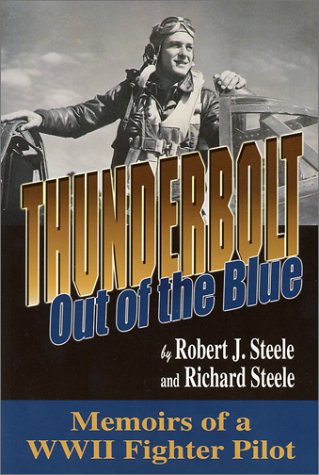 Index, photos. The author retells his uncle's experiences as a fighter pilot during WWII.

Richard Steele developed his interest in World War II history listening to the war stories of his father, Jack V. Steele, and his uncle, Bob Steele. Their commitment to their country was typical of the sense of duty and sacrifice made by America's young men during the war years.

Richard Steele grew up in Kansas City, Missouri. After graduation from Southwest High School in 1970, he served in the U.S. Army from 1971 to 1974. He subsequently obtained a Bachelor of Science degree from the University of Missouri in Business Logistics (1979), and in 1980 joined Toyota Motor Sales, U.S.A., Inc., where he is currently a Service, Parts & Body Shop Development Consultant.

1. Thunderbolt: Out of the Blue: Memoirs of a World War II Fighter Pilot