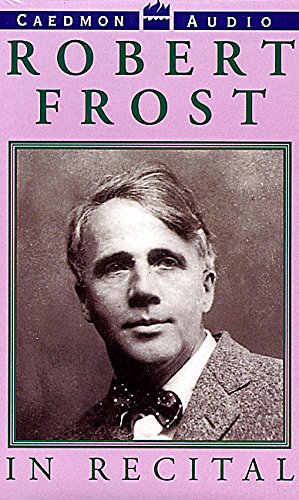 To c haracterize Robert Frost's poetry is to speak of mastery of not one voice but many voices, and that is most apparent when he is heard reading his poems aloud. He portrays men and women in rural New England and differentiates among them, giving them real feelings and real utterances. That diversity is evident on this recording, which includes Frost's readings at the Poetry Center of the 92nd Street Y in New York City.

Born in San Francisco in 1874, Robert Frost was one of America's leading 20th-century poets and a four-time winner of the Pulitzer Prize. An essentially pastoral poet often associated with rural New England, Frost wrote poems whose philosophical dimensions transcend any region.

After his father's death in 1885, when young Frost was 11, the family left California and settled in Massachusetts. Frost attended high school in that state, entered Dartmouth College, but remained less than one semester. Returning to Massachusetts, he taught school and worked in a mill and as a newspaper reporter. In 1894 he sold "My Butterfly: An Elegy" to The Independent, a New York literary journal. A year later he married Elinor White. From 1897 to 1899 he attended Harvard College as a special student but left without a degree. Over the next ten years he wrote (but rarely published) poems, operated a farm in Derry, New Hampshire (purchased for him by his paternal grandfather), and supplemented his income by teaching at Derry's Pinkerton Academy.

In 1912, at the age of 38, he sold the farm and used the proceeds to take his family to England, where he could devote himself entirely to writing. His efforts to establish himself and his work were almost immediately successful. A Boy's Will was accepted by a London publisher and brought out in 1913, followed a year later by North of Boston.

The Frosts sailed for the United States in February 1915 and landed in New York City two days after the U.S. publication of North of Boston (the first of his books to be published in America). Sales of that book and of A Boy's Will enabled Frost to buy a farm in Franconia, New Hampshire; to place new poems in literary periodicals and publish a third book, Mountain Interval (1916); and to embark on a long career of writing, teaching, and lecturing. In 1924 he received a Pulitzer Prize in poetry for New Hampshire (1923). He was lauded again for Collected Poems (1930), A Further Range (1936), and A Witness Tree (1942). Over the years he received an unprecedented number and range of literary, academic, and public honors.

Frost's importance as a poet derives from the power and memorability ofparticular poems. "The Death of the Hired Man" (from North of Boston)combines lyric and dramatic poetry in blank verse. "After Apple-Picking"(from the same volume) is a free-verse dream poem with philosophicalundertones. "The Road Not Taken" and "Birches" (from MountainInterval) and the oft-studied "Stopping by Woods on a Snowy Evening" (fromNew Hampshire) exemplify Frost's ability to join the pastoral andphilosophical modes in lyrics of unforgettable beauty.

Frost's poetic and political conservatism caused him to lose favor with someliterary critics, but his reputation as a major poet is secure. Frost died in Boston in 1963.

Book Description Harper 1987-10-23, 1987. Audio Cassette. Condition: Good. Item is in good condition. Some moderate creases and wear. This item may not come with CDs or additional parts including access codes for textbooks. Might be an ex-library copy and contain writing/highlighting. Seller Inventory # DS-0898455936-3