Items related to Battle for the Caucasus

Grechko, Andrei Battle for the Caucasus

Battle for the Caucasus 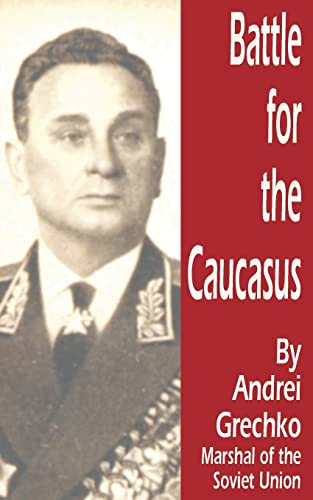 The Battle for the Caucasus (July 1942-October 1943) coincided in time with the Stalingrad and Kursk battles, and played an important role in bringing about a radical change in the course of the Second World War.

In this book the prominent Soviet military commander, Marshal of the Soviet Union Andrei Grechko, gives a stage-by-stage account of the heroic Battle for the Caucasus: the heavy fighting in the Don and Kuban steppes, the battles on the Stavropol Heights and in the foothills of the Caucasus, the defense of Novorossiisk, Krasnodar, Maikop, Tuapse and Armavir and the destruction of the enemy forces in the passes of the Main Caucasian Range.

Signs of an impending turning-point appeared in January 1943 when divisions and then armies went over to the offensive driving the enemy out of Stavropol, Kransodar and the Kuban. Like a mighty mountain torrent the entire mass of Soviet troops swept the Germans out of the North Caucasus. It was a magnificent display of the power of Soviet arms, and the fraternity and friendship of the Soviet peoples.

The author objectively examines every phase of the great battle and reinforces his conclusions with documents.

Andrei Antonovich Grechko was born on October 17, 1905 into the family of a farmer in Rostov Region.

During the Great Patriotic War of 1941-1945 he first commanded a cavalry division and then a cavalry corps (1941); in April 1942 he was appointed Commander of the 12th Army and subsequently commanded the 47th, 18th and 56th Armies; in October 1943 he was posted Deputy Commander of the 1st Ukrainian Front, and beginning from December 1943 until the end of the war commanded the 1st Guards Army which took part in liberating the Ukraine's territory west of the Dnieper and participated in the Lvov-Sandomir, Uzhgorod and Moravska-Ostrawa operations.

In the period from 1945 to 1953 he was Commander of the Kiev Military District. From 1953 to 1957 he was in charge of the Soviet forces in Germany and from November 1957 was First Deputy Minister of Defense of the USSR and Commander-in-Chief of the Land Forces. In April 1960 he was appointed Commander-in-Chief of the United Forces of the Warsaw Treaty Organization. He was appointed Minister of Defense of the USSR in 1967.

1. Battle for the Caucasus

2. Battle for the Caucasus

3. Battle for the Caucasus (Paperback or Softback)

4. Battle for the Caucasus

5. Battle for the Caucasus

Book Description University Press of the Pacific, 2001. PAP. Condition: New. New Book. Delivered from our UK warehouse in 4 to 14 business days. THIS BOOK IS PRINTED ON DEMAND. Established seller since 2000. Seller Inventory # IQ-9780898753967