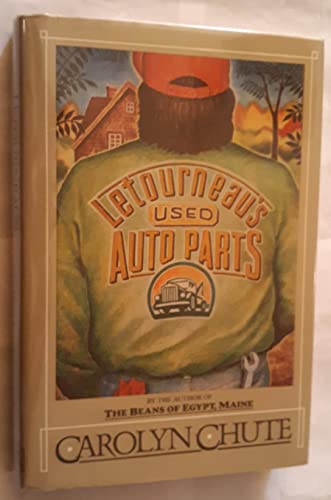 Tells the stories of the inhabitants of Miracle City, including Big Lucien, owner of the auto parts store, Crowe Bovey, a mechanic, Ernie Train, a country music star, and June Marie, who's in business for herself

Carolyn Chute burst on the literary scene in 1985 with the critically acclaimed and bestselling The Beans of Egypt, Maine. She followed this success with Letourneau's Used Auto Parts and the epic Merry Men. Her nonfiction work has appeared in the New York Times, the Nation, and elsewhere, and she has written about the militia movement in Maine, where she lives with her husband, Michael, and various furry creatures.

Any doubts that Chute could not follow her remarkable debut novel The Beans of Egypt, Maine with another winner will be vanquished by this assured, complex and memorable tale, told in bold, forceful prose. We are back in Egypt and in the adjacent, ironically named Miracle City, a squalid jumble of unpainted shacks and trailers that is nonetheless a welcome haven to the residents of this poverty-stricken community. The area's most important citizen is the eponymous Big Lucien Letourneau, who runs the auto salvage junkyard at which most of the men work. It's a brutal life, and in bad times Lucien can't afford to pay his men. But if he sometimes lacks money, Big Lucien never lacks compassion. He is a one-man welfare system, sheltering the destitute, homeless and elderly; some of his ex-wives and many of his children, in and out of wedlock; and a churning population of cats. For a long time we see Big Lucien only obliquely and he assumes almost mythic dimensions before we finally meet him, late in the novel, when Chute's bleakly comic message about the enobling power of compassion becomes clear. Meanwhile we become involved with the other, beautifully developed characters., The recipients of Big Lucien's "heart of gold" are desperately poor, ignorant, unwashed and unkempt, sexually promiscuous, violent when drunkyet Chute gives them humanity and dignity. Her compassion for people condemned to deadend lives infuses this powerful novel with universal meaning.
Copyright 1988 Reed Business Information, Inc.