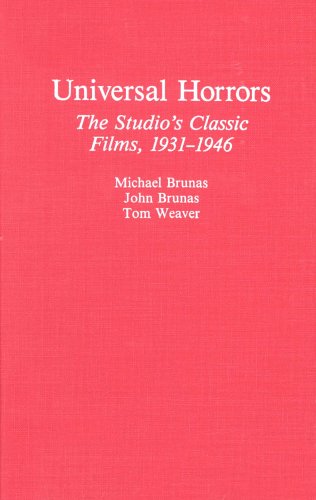 Universal Studios was to horror films what Warner Bros. was to gangster films during the Golden Age of Hollywood. This book is the definitive study of the 85 films produced during this era and presents a general overview as well. For each film, complete cast lists, credits, storyline, behind-the-scenes information, production history, commentary from the cast and crew, and in-depth critical analysis are included. Generously illustrated.

Michael Brunas and John Brunas of Palisades Park, New Jersey, are writers, collectors and lifelong fans of the horror film.

Universal Studios was the premiere source of horror films during Hollywood's golden age, producing Dracula, The Wolf Man, the Frankenstein movies, and many more films. For each of the 85 horror films made during this period, the authors provide a complete cast list with credits, a critical synopsis, and the production history, often with commentary by the cast or crew. Photographs are copious and well chosen. The authors' history is informal but very informative. When their judgments differ from the consensus, they ably defend their opinions. They are fans of the genre, but this does not blind them to the fact that many of the films in their book are dross. A broad definition of "horror" is used, so that many mystery films (including those with Sherlock Holmes) are included. Don't hide this excellent work in reference; circulate it among interested patrons.
- John Smothers, Monmouth Cty. Lib., Manalapan, N.J.
Copyright 1990 Reed Business Information, Inc.