Items related to Gypsies Under the Swastika (Interface Collection)

Gypsies Under the Swastika (Interface Collection) 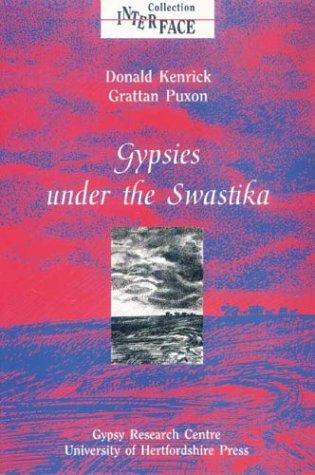 A quarter of a million Gypsies shared the same fate as the Jewish people in the Nazi Holocaust. This is an absorbing introduction to the "hidden Holocaust" for the general reader as well as being suitable for use in the classroom by teachers and their students.

Donald Kenrick was born in London on the 6 June 1929, the descendant of Jewish Polish immigrants who left Poland around 1900 at the time of ant-semitic pograms.

He took a first-class honours degree in Arabic from London University, followed by a Master's on the image of the Jew in Scandinavian literature, for which he was required to master all the nordic languages as well as Hebrew and Yiddish. An ethusiasm for Bulgarian folkdance led him to a job teaching in Bulgaria, where he came into contact with the Romani language, eventually completing a PhD on the Drindari dialect. He has made a lasting contribution to Romani linguistics and was the first secretary of the WRC Language Commission in 1971.

His working life has been spent in adult education but he has frequently been called on as an expert witness to defend the interests of Gypies in conflicts with the law and is always available to help and advise them when needed.