Items related to Coins of Scotland, Ireland and the Islands (Pt. 2)

Coins of Scotland, Ireland and the Islands (Pt. 2) 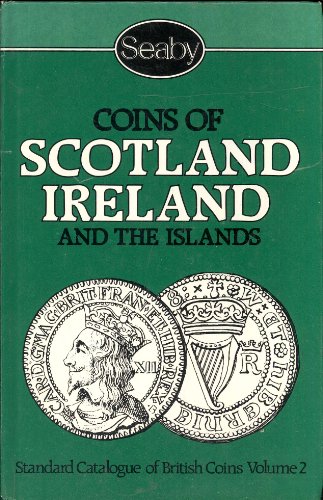 Scotland did not have a native coinage for well over a millenium after a coinage system had been adopted in Southern Britain and for over a century after the Norsemen first minted pennies in Ireland. This does not mean that coinage was unknown in ancient Alban: far from it, for the occasional Celtic coin from the South has been discovered north of the Border and, of course, many hoards and individual specimens of Roman coins have been found in the areas of Roman military occupation between the Hadrianic and Antonine fortification systems, and even north of these along the route to the North-East coast. But in the Celtic lands of Ireland, Wales, Strathclyde and Scotland, where the socioeconomic system did not favour large urban settlements, there was not the same need for coin as there was in the more commercially developed South.

Book Description Sanford J Durst, 1984. Condition: Good. A+ Customer service! Satisfaction Guaranteed! Book is in Used-Good condition. Pages and cover are clean and intact. Used items may not include supplementary materials such as CDs or access codes. May show signs of minor shelf wear and contain limited notes and highlighting. Seller Inventory # 0900652640-2-4

2. Coins of Scotland, Ireland and the Islands

Book Description Sanford J Durst 1984-06-01, 1984. Hardcover. Condition: Very Good. Item is in very good condition. If supplemental codes/CDs for textbooks are required please contact us prior to purchasing as they may be missing. Seller Inventory # DS-0900652640-2

5. Standard Catalogue of British Coins: Coins of Scotland, Ireland and the Isles Pt. 2

Book Description Spink & Son Ltd, 1983. Hardcover. Condition: Good. VINTAGE MAY OR MAY NOT HAVE A DUST JACKET Usual signs of a well read book but good overall condition. May not look good on your bookcase after reading and probably not suitable as a present unless hard to find elsewhere MOST IMAGES ARE STOCK PHOTOS. IF YOU NEED A PARTICULAR EDITION PLEASE SEND US A MESSAGE BEFORE PURCHASING SO THAT WE CAN CHECK THAT THE ONE ON OFFER IS THE ONE YOU REQUIRE. SECURE DAILY POSTING FROM UK. 30 DAY GUARANTEE. Seller Inventory # mon0002792461

6. Coins Of Scotland, Ireland And The Islands ( Jersey, Guernsey, Man And Lundy )

Shipping: US$ 12.33
From United Kingdom to U.S.A.
Destination, rates & speeds

8. Standard Catalogue of British Coins: Coins of Scotland, Ireland and the Isles Pt. 2

Book Description . Hardback. Condition: Good. The book has been read but remains in clean condition. All pages are intact and the cover is intact. Some minor wear to the spine. Seller Inventory # GOR003380025

9. Standard Catalogue of British Coins: Coins of Scotland, Ireland and the Isles Pt. 2

Book Description . Hardback. Condition: Fair. A readable copy of the book which may include some defects such as highlighting and notes. Cover and pages may be creased and show discolouration. Seller Inventory # GOR007952200