Items related to A Month in the Country

J.L. Carr A Month in the Country 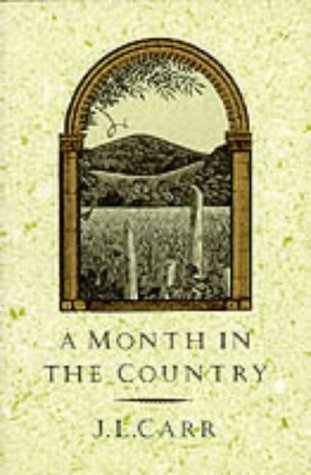 [ A MONTH IN THE COUNTRY BY CARR, J. L.](AUTHOR)PAPERBACK

Review:
Any good reader has, well, had it with novels of healing. The culture of confession has given rise to novels that begin with an unspeakable act (graphically described) and end in redemption (this part is usually more vague). That's not how it works in J.L. Carr's quiet, brief, dreamy A Month in the Country. Writing in 1978, Carr's narrator, Tom Birkin, recalls the summer of 1920. A veteran of the Great War and a cuckold, Tom arrives in Oxgodby to restore a medieval mural in the church. His single season in this town in the north of England passes quickly: he sleeps in the belfry, makes a friend or two, falls secretly in love with the vicar's wife, and, chipping away at plaster and dirt, uncovers a lost masterpiece. These events seem to melt past Tom in the heat of the perfect, fleeting English summer: "The front gardens of cottages were crammed with marjoram and roses, marguerites, sweet William, at night heavy with the scent of stocks. The Vale was heavy with leaves, motionless in the early morning, black caves of shadow in the midday heat, blurring the sound of trains hammering north and south."

Carr devotes many fewer words to Tom's time in the war. The vicar's wife tries to ask him about it. "'What about hell on earth?' she said. I told her I'd seen it and lived there and that, mercifully, they usually left an exit open." His healing consists of not talking about his past--perhaps a revolutionary notion these days. A Month in the Country, with its paean to a lost, good place, oddly recalls Alain-Fournier's Le Grand Meaulnes. But where that novel was elliptical, Carr's work values clarity and simplicity above all. These are rare enough qualities, but to find them in a novel of romance and healing is a rarer pleasure still. --Claire Dederer

About the Author:
James Lloyd Carr was born in 1912 and attended the village school at Carlton Miniott in Yorkshire. A head teacher, publisher, and novelist, his books include A Day in Summer (1964); A Season in Sinji (1967); The Harpole Report (1972); How Steeple Sinderby Wanderers Won the FA Cup (1975); A Month in the Country (1980), which won the Guardian Fiction Prize and was shortlisted for the Booker Prize; The Battle of Pollock’s Crossing (1985), also shortlisted for the the Booker Prize; What Hetty Did(1988); and Harpole & Foxberrow General Publishers (1992). He died in Northhamptonshire in 1994.

Michael Holroyd is the author of acclaimed biographies of Lytton Strachey, Bernard Shaw, and Augustus John. He has also written a memoir, Basil Street Blues. He lives in London with his wife, the writer Margaret Drabble.

Month in the Country

A Month in the Country (Paperback)

Book Description Paperback. Condition: New. New edition. Language: English. Brand new Book. A long spring uncovering a Medieval wall painting in rural Yorkshire allows a young man time for recuperation after WW1. There's a love affair that doesn't quite happen, and a singular cast of supporting characters. This story of wistful reminiscence of an England long gone, is written in English constructed as it should be. Seller Inventory # AAZ9780900847929

Month in the Country (Paperback)

Book Description Paperback. Condition: new. Paperback. Shipping may be from multiple locations in the US or from the UK, depending on stock availability. Seller Inventory # 9780900847929

Shipping: US$ 12.38
From United Kingdom to U.S.A.
Destination, rates & speeds