Items related to Testimony of Light 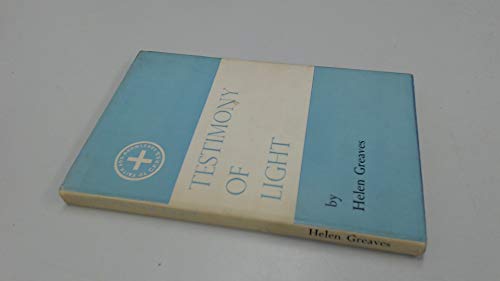 For the millions who have enjoyed Proof of Heaven,  Heaven is Real, To Heaven and Back, and Getting to Heaven, Testimony of Light  is about life after death—and the amazing story of a friendship that endured beyond the veil—published for the first time in the United States.

Frances Banks died, as she had lived, fully aware of what she was experiencing and where she hoped to go. She was an Anglican nun for 25 years and for much of that time, the principal of the Teachers' Training College in Grahamstown, South Africa.  She was the author of many psychological book. Her last book was Frontiers of Revelation, an account of research into psychic and mystical phenomena.

Her friend Helen Greaves was by her side as she finally lapsed into unconsciousness. Then, one evening some three weeks after Frances's death, Helen sensed her presence. This extraordinary encounter marked the beginning of contact between them from both sides of the veil—between life as we know it and life on "the other side."

Testimony of Light is based on these communications that Helen received telepathically from Frances. The writings have been authenticated by those who knew them both and who were familiar with their individual writing styles. Moving and inspiring, this classic book is a testament to the enduring power of their friendship, and offers an important message to us all—that the death of the body is but a gentle passing to a much freer and fuller life.

Charles William Daniel (1871-1955) was a maverick free-thinker whose tiny publishing house had august links with many of the most influential thinkers and movements of the 20th century. To wit, copies of Daniel's books could be found in the library at Ghandi's ashram. This spirit lived on after his death, and the company maintained its niche by publishing definitive texts on a variety of spiritual and esoteric subjects. Many of these titles, notably those on Aromatherapy and Bach Flower remedies, have become standard works on the subject. When the C.W. Daniel list went looking for a new home, the Vermilion and Rider imprints were the natural place for this wonderful collection of authors.

HELEN GREAVES lived in the United Kingdom and was the author of several books of metaphysics, including The Challenging Light, The Dissolving Veil, and The Wheel of Eternity. Testimony of Light has remained in print since it was first published in 1969 and it has touched the lives of many.

Book Description Churches' Fellowship for Psych. Hardcover. Condition: Fair. A readable copy. All pages are intact, and the cover is intact. Pages can include considerable notes-in pen or highlighter-but the notes cannot obscure the text. At ThriftBooks, our motto is: Read More, Spend Less. Seller Inventory # G0902666010I5N00

Book Description Churches' Fellowship for Psych, 1969. Condition: Good. A+ Customer service! Satisfaction Guaranteed! Book is in Used-Good condition. Pages and cover are clean and intact. Used items may not include supplementary materials such as CDs or access codes. May show signs of minor shelf wear and contain limited notes and highlighting. Seller Inventory # 0902666010-2-4