Items related to Monganga Paul: The Congo Ministry and Martyrdom of... 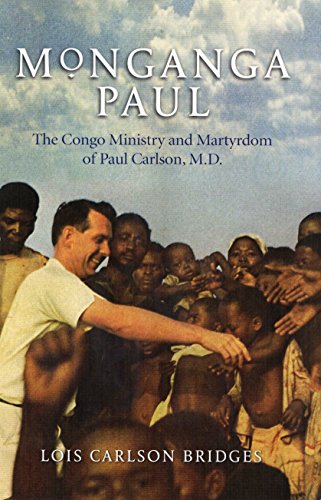 Here is the electrifying story of Christian heroism that caught the world's imagination when first published in 1965 - the story of a California surgeon who took his family into the jungle of Congo to care for the sick and needy, only to be gunned down after being falsely accused of being a spy. The horror of Dr. Paul Carlson's death on November 24, 1964, during a rescue attempt in Kisangani (then Stanleyville), evoked shocked reactions around the world. Lois Carlson Bridges, Paul's widow, traces the impact of his faith as he sought direction for his life, and the struggle the couple faced in choosing a life of hardship over the alluring comforts of a wealthy suburban medical practice. The sights and sounds of daily life at the Wasolo hospital - in the forgotten corner of the Ubangi region - spring from these pages, as do the tales of love that bonded the Carlsons and their Congolese brothers and sisters. The reader will sense the pain of separation as Paul Carlson bids farewell to his family and returns to care for sick patients, only to be arrested and held hostage. Monganga Paul captures the deep faith and quiet heroism of this man who inspired those around him - and millions around the world - with his witness for Christ and selfless sacrifice on behalf of those he was called to serve. "All of us need to have rekindled in our minds and hearts the true meaning of missions today," wrote Billy Graham about Paul Carlson in 1965. "His life as a prisoner and death as a hero . . . combine to thrill the soul and bring praise to God for his greatness, goodness, and love." "The impact of Paul Carlson's life and death on the Congolese people was incalculable," notes Evangelical Covenant Church President Glenn R. Palmberg. "Forty years later, people are still being healed - both physically and spiritually - because of him. Paul Carlson went where God wanted him to be and did what God wanted him to do. That is exactly what God asks of each one of us."