Items related to English Translation of the Meaning of Al-Qur'an:...

Malik, Muhammad Farooq-i-Azam English Translation of the Meaning of Al-Qur'an: The Guidance for Mankind (English Only)

English Translation of the Meaning of Al-Qur'an: The Guidance for Mankind (English Only) 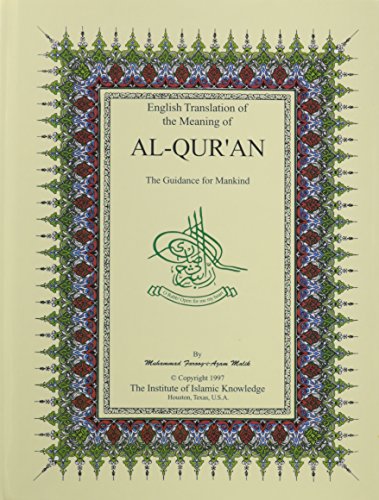 Al-Qur'an, the Guidance for mankind, is a unique translation of the Holy Qur'an in contemporary American English. It includes the Biography of the Prophet Muhammad, peace be upon him, his mission as a Prophet, his ranking as in the human history. Text is paragraphed by theme and theme is written in the margins on each page for easy reference. Its features include - (1) Field Testing the Communication of Divine Message: The unique feature of this translation is its field testing for over 3 1/2 years to improve the communication and understanding of the Divine Message. Translation passages were given to the New Muslim and Non-Muslim high school and college students for reading under the supervision of various Ulema (scholars). After reading, the person was asked to explain as to what he/she understood from the passage. If his/her understanding was the same as is in the Arabic Text of the Holy Qur'an then we concluded that we have been successful in conveying the Divine Message properly. If his/her understanding was different than what the Qur'anic verses were stating, we kept on rewording the translation until those verses were understood properly. It was tremendous patience on part of the participants. May Allah reward them all. (2) Simplicity: In this translation Simple Language and Direct Approach is used for appealing to the common sense of scholars and common people. (3) Understandability: There are no foot notes to refer and no commentary or lengthy explanations to read. All necessary explanations have been incorporated right there in the text with italic type setting to differentiate from the translation of the meanings of Qur'anic Arabic Text. (4) Outline of Pertinent Information: Before the start of each Srah, information relating to its Period of Revelation, Major Issues, Divine Laws and Guidance has been presented as an outline. Then a summary of the preceding events has been tabulated for the reader to understand the histo! rical background to grasp the full meaning of the Divine Message. (5) Reviews, Input and Approvals: This project was started in 1991 and initial draft completed in 1994. Then the Translation was sent to different Ulema (Scholars) in Town and throughout United States for their review and input. After their reviews and input it was sent to Jme Al-Azhar Al-Sharif in Egypt, Ummal Qur in Saudi Arabia and International Islamic University in Pakistan for their review, input and approval. This translation was published after their reviews and approvals.

Worked as a Lecturer for 3 years, as an Attorney for 5 years and Audit Management for 18 years in a major U.S. Corporation. Now he has dedicated his life for conveying the Message of Allah. -

During his residence in Pakistan he started an organization called Anjaman-e-Islh-e-Mushra (Social Welfare Society - 1959) to reform Aqeedah and fight against the un-Islamic local customs. This organization worked in all the surrounding villages and was successful in achieving most of its objectives. He also started Tarjama-tul-Qur'an (Translation of the Holy Qur'an- 1963) sessions at various Masjid.

During his residence in New York he started Dars-e-Qur'an (Qur'anic Study Sessions - 1970) at Bronx and Manhattan. Al-Hamdulillah, most of his Dars-e-Qur'an participants are the founding members of different Islamic Centers. He is among the pioneers of Islamic Circle of North America (ICNA).

After moving to Houston in 1975 he was elected three times as a Treasurer of the Islamic Society of Greater Houston (ISGH). As treasurer, he organized Accounting and Check-o-Matic systems. He was then elected twice as the Director of Religious Affairs and one time as the Director of Education. In these positions he organized the Zonal system of ISGH for children's Islamic Education and Qur'anic Tajweed. Then he was elected as the President of ISGH. In that position he lead the community in buying the Zonal facilities at the North, Southwest, Southeast, Northwest and Bear Creek areas and putting these facilities in Owqf (Trust) with North American Islamic Trust (NAIT). He also accomplished the amendments to the ISGH Constitution and Bylaws for the future unlimited growth of the Muslim Community in Greater Houston area. He also served as Chairman of the Planning and Administration Committee and developed short term and long term plans for the ISGH. He is a founding member of the Islamic Education Institute of Texas (IEIT) and the Institute of Islamic Knowledge (IIK).

At the National Level he has worked as Vice Chairman of the Islamic Coordinating Committee (ICC) and has been a member of Board of Advisers to the North American Islamic Trust (NAIT).

1. English Translation of the Meaning of Al-Quran: The Guidance for Mankind

2. English Translation of the Meaning of Al-Qur'an: The Guidance for Mankind (English Only)

3. English Translation of the Meaning of Al-Qur'an: The Guidance for Mankind (English Only)

4. ENGLISH TRANSLATION OF THE MEANI