Items related to Evasions: The American Way of Military Service 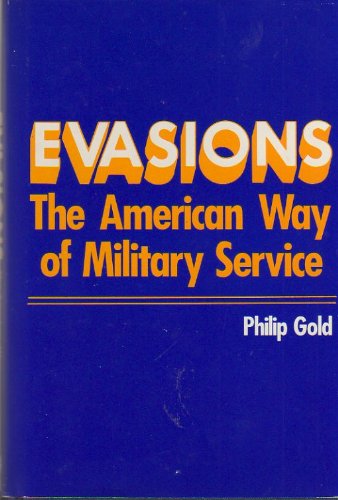 Should Military Service be an Obligation of Citizenship?

This is essentially a wide-ranging discussion of the serious mismatch between America's military commitments and the human resources needed to fulfill them on short notice. Gold, history professor at Georgetown University, warns of the inherent danger of relying on reservists for the bulk of our forces in time of war. At the core of the treatise is a study of the philosophical and historical basis of conscription, arguments for and against, and possible forms a new draft might take. The book includes a blunt examination of what the author calls "the destruction of the concepts of military claim and obligation as legitimate aspects of citizenship" during the Vietnam War and the draft-versus-voluntarism debate that followed it. Gold argues that we have "substituted money for thought" in our current defense program.
Copyright 1986 Reed Business Information, Inc.

Its title would have you think this book is about the way Americans avoid military service; its contents are a cogent and expert philosophical analysis of attitudes toward service. Gold begins by examining the American philosophy of military service, and then analyzes the American Revolution and the Vietnam War in light of that philosophy. He discusses not only why Americans chose not to participate in each war, but also why they did participate. His conclusion is that Vietnam was a failure of mind, not of morality. Finally, there is a discussion of current military policy, with important questions that must be answered lest our defenses deteriorate in the future. For most libraries. Edward Gibson, James Madison Univ. Lib., Harrisonburg, Va.
Copyright 1986 Reed Business Information, Inc.