Items related to Unseen Warfare: The Spiritual Combat and Path to Paradise... 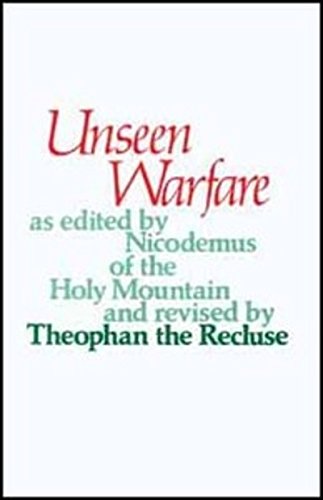 This spiritual classic was written by Lorenzo Scupoli, a sixteenth-century Venetian priest. Immensely popular in its own day, it was ranked by Francis de Sales with the Imitation of Christ. In the general rapport between Western and Eastern Christendom, it reached Nicodemus of the Holy Mountain, who first recognized its immense spiritual worth, and later, in the nineteenth century, Theophan the Recluse, both of whom edited and translated the work.

Rich in its references to the teachings of the saints and Fathers, Unseen Warfare combines the insights of West and East on that spiritual combat which is the road to perfection and the stripping away of all that militates against it. Staretz Theophan wrote in his foreword, "the arena, the field of battle, the site where the fight actually takes place is our own heart and all our inner man. The time of battle is our whole life."

Unseen Warfare is a perfect complement to the Philokalia.

Book Description Paper Back. Condition: New. Unseen Warfare consists of eighty chapters on how to wage spiritual warfare, and thus avoid the fate of those who embrace spiritual atrophy. Originally written by a sixteenth-century Roman Catholic priest, Lorenzo Scupoli, the text was translated into Greek and edited by the Orthodox monk Nicodemus of Mount Athos in the eighteenth century. It was further revised and translated into Russian by St. Theophan the Recluse, of whose version this current edition is a translation. The resulting book is thus a fascinating amalgam of simultaneous convergence and polemic between Orthodoxy and Roman Catholicism. In his very helpful introduction to the present volume, Professor H.A. Hodges writes, ''The most drastic changes occur in the chapters dealing with the ways of prayer, and they amount, in sum, to a criticism of Scupoli's teaching at this point. Nor is the criticism merely personal; it is rather a conflict of traditions. It is not merely Nicodemus or Theophan substituting his own views for Scupoli's; it is the Orthodox Church criticizing the Counter Reformation and quietly but firmly adhering to its own more ancient traditions in the life of prayer.'' Unseen Warfare remains one of the most useful and trusted manuals in the vast literature of Orthodox teaching on the spiritual life. 280 pp. Seller Inventory # 211140

Unseen Warfare: The Spiritual Combat and Path to Paradise of Lorenzo Scupoli