Items related to Come to the Secret Garden: Sufi Tales of Wisdom

Come to the Secret Garden: Sufi Tales of Wisdom 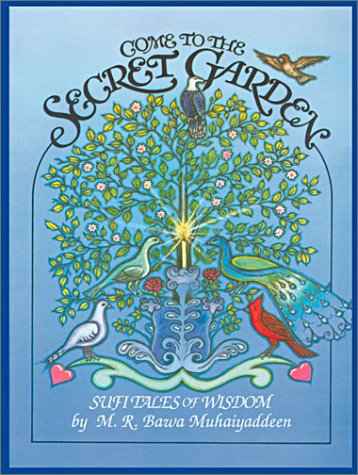 These inviting tales provide simple, yet profound advice to young children. M. R. Bawa Muhaiyaddeen speaks of the generosity of nature, of the tree that gives its fruit selflessly without expecting anything in return, and the forest life that lives in unity. He also warns about tiny red ants that can cause so much damage even though they are small, and reminds us to guard ourselves against any negative qualities, no matter how minor.

The stories also tell children about their true nature one of purity and resplendent light that comes from God.

Perfect for bedtime stories, these selections are gems of wisdom that young children can take in, ponder, and draw from in their lives.

Muhammad Raheem Bawa Muhaiyaddeen, a Sufi mystic, can best be remembered for his efforts to bring unity through understanding to the faithful of all religions.

Little is known of his early personal history. Records of his life began in the early 1900's when religious pilgrims traveling through the jungles of Sri Lanka first caught glimpse of a holy man. They were overwhelmed by the depth of divine knowledge that he imparted.

Sometime later a pilgrim invited him to a nearby village, and with that began his public life as a teacher of wisdom.

Throughout Sri Lanka, people from all religious and ethnic traditions would listen to his public discourses. Many consulted him on how to conduct life's affairs, including public figures, politicians, the poor, and the learned.

In 1971 Bawa Muhaiyaddeen accepted an invitation to visit the United States. Here, once again, people from all religious, social and ethnic backgrounds would join to hear him speak. Across the United States, Canada and England, he won recognition from religious scholars, journalists, educators and world leaders. The United Nation's Assistant Secretary General, Robert Muller, asked for Bawa Muhaiyaddeen's guidance on behalf of all mankind. Time Magazine turned to him for clarification during the hostage crisis in 1980. Thousands more were touched by his wise words when interviewed in Psychology Today, the Harvard Divinity Bulletin, the Philadelphia Inquirer, and the Pittsburgh Press.

1. COME TO THE SECRET GARDEN: Sufi Tales Of Wisdom (ages 8+up)

2. Come to the Secret Garden: Sufi Tales of Wisdom (Hardback)

3. Come to the Secret Garden: Sufi Tales of Wisdom

4. Come to the Secret Garden: Sufi Tales of Wisdom (Hardback)