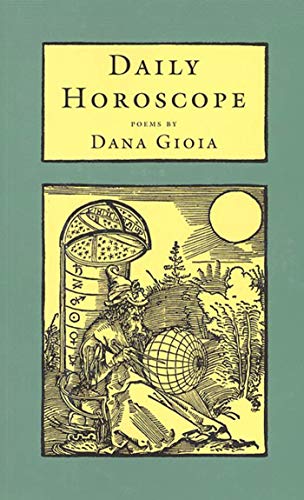 "Daily Horoscope is a stunning first book . . . Gioia is a master of forms. He experiments with old ones, and in a few instances has taken to inventing new ones."--Robert Phillips, Arrival

"Page for page, seldom has a first collection offered so many aesthetically, psychologically, and philosophically satisfying poems."--ALA Booklist

"In combining the powers of form and narration, Dana Gioia is the poet who most fully realizes the potential of the New Formalist movement."--Robert McPhillips, The Sewanee Review

"Daily Horoscope, in the finest sense, represents the perfect synthesis of maker and object made. It would be specious to praise this volume as a first book. Gioia has given us a book that is more accomplished than recent publications by many more celebrated practitioners."--Robert McDowell, The Hudson Review

"Here we have a truly exceptional poet. In his mid-thirties, Dana Gioia can be compared to Wallace Stevens and not be routed by the comparison."--Raymond Nelson, Virginia Quarterly Review

Dana Gioia was born in Los Angeles in 1950. He received his B.A. and M.B.A. degrees from Stanford University. He also has an M.A. in Comparative Literature from Harvard University. For fifteen years, he worked as a business executive in New York before quitting in 1992 to write full-time. He has published three collections of poetry--Daily Horoscope (1986), The Gods of Winter (1991), and Interrogations at Noon (2001), which won the American Book Award. He has also written an opera libretto, Nosferatu (2001). His critical collection, Can Poetry Matter? (2002) was a finalist for the National Book Critics Circle Award. A prolific essayist, reviewer, and translator, Giogia has also published nine anthologies of poetry and fiction. He lives in Sonoma County, California, with his wife and two sons.