Items related to The Bible in the Literary Imagination of the Spanish... 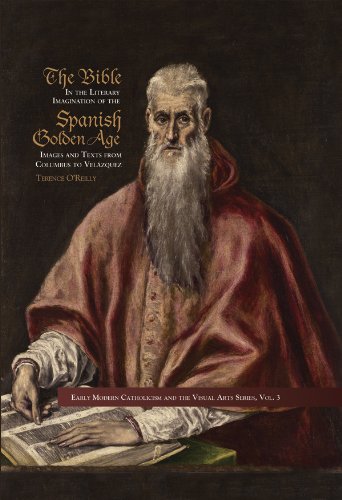 The study of the literary impact of the Bible in the Spanish Golden Age is a relatively neglected field.

The present book considers, in a sequence of studies, some of the ways in which the biblical culture of Spain left its impress on the literature and art of the time. It does so by tracing the presence of biblical images in a selection of works composed between the reigns of Ferdinand and Isabella and Philip IV. Together these works represent some of the major genres, literary and artistic, that flourished in the Golden Age, including travelogues, works of devotion, narrative fiction, biblical exegesis, poetry, popular drama, and religious painting. They also illustrate the role played by ancestral images in a period of cultural change.

Chapter One tackles an issue that has given rise to much discussion in recent years: the literary impact in Spain of the New World. Despite the Chronicles of the Indies, which includes eyewitness accounts by conquistadors, ethnographic studies by missionaries, and general histories penned in Spain, it is not easy to detect the presence of the New World in the literary imagination of the Golden Age. In the fiction, poetry, and drama of the period it is rarely accorded a central role; often, indeed, it does not figure at all. Instead, the Discoveries leave their mark in the imagery of the age.

Chapter Two highlights the translation of the Spiritual Exercises of Ignatius of Loyola. Designed to be a manual for the person "giving" the exercises, rather than as a text to be read by the one "receiving" them, its contents could be adapted to a wide range of needs, and it informed the Society of Jesus's many pastoral activities.

Chapter Three turns to the presence of the Bible in Lazarillo de Tormes, one of the earliest and most popular examples of realist fiction in Europe, and evidence of the influence in Spain of the European renaissance. Although the book was enormously popular, interpretation of it has proven notoriously problematic because its language is often obscure and arcane. The biblical allusions it contains illustrate the point: modern editors have noted their presence in the text, but they have not agreed about their number, provenance, or function. This chapter argues that they are more numerous than has been supposed, and it underlines the fact that many of them derive from proverbial sayings and jokes, a testimony to the transmission of biblical topics at a popular level.

The early 1550s saw the emergence in Spain not only of realist prose fiction but of poetry informed by biblical themes and written in the Renaissance style. Two works signalled its arrival: A collectiono of religious verse by Jorge de Montemayor, published late in 1552 or early 1553, and Benito Arias Montano's poetic paraphrase of the Song of Songs. Chapter Four also looks at the poetry of Fray Luis de Leon, who studied under the great Cistercian exegete Cipriano de la Huerga.

CHapter Five turns to the more public and popular genre of the comedia. The subject here is the play, The Man Condemned for Lack of Trust, which dramatises a thorny problem of theology.

The final chapter moves from drama to the religious art of the period. It examines in detail the literary context of two bodegones, both inspired by biblical subjects, that Diego Velazquez painted as a young man in Seville. 1623's Christ in the House of Martha and Mary and The Supper at Emmaus have both been the subject of extensive debate concerning their secular and sacred elements. The paintings appear to have adapted iconographic conventions familiar to contemporaries in order to create a misterio.

Each chapter explores the hidden sense of each art form, and concludes that the aart of the Spanish Golden Age explores distinct but complementary ways of reconciling contemplation and action.