Items related to Ramakrishna As We Saw Him

Swami Chetanananda Ramakrishna As We Saw Him

Ramakrishna As We Saw Him 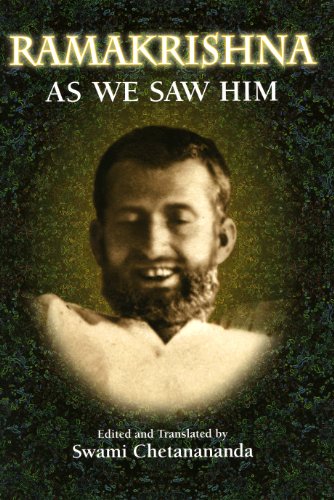 The revised edition has new reminiscences by Swami Yogananda, Swami Subodhananda, Ramendra Sundar Bhattacharya, Narayan Chandra Ghosh, and Trailokya Nath Dev, as well as additional information in Ramlal Chattopadhyay s chapter. These new, eyewitness accounts are not found in Sri Ramakrishna and His Divine Play or The Gospel of Sri Ramakrishna. A total of 45 reminiscences by persons who knew him, show vividly how Sri Ramakrishna lived daily the spiritual message he taught, and how he excelled in opening a path for God into the human heart.

Swami Chetanananda is a monk of the Ramakrishna Order. Before coming to the United States, he worked in the editorial and publication departments of Advaita Ashrama, Mayavati, Himalayas and also at its Calcutta branch. He was an assistant minister of the Vedanta Society of Southern California from 1971 to 1978. He came to St. Louis in March, 1978 and at present is the minister of the Vedanta Society of St. Louis. Swami Chetanananda has written, edited, and translated many important books on Ramakrishna, Vivekananda, and Vedanta.

For the first time I found a man who dared to say that he had seen God, that religion was a reality to be felt, to be sensed in an infinitely more intense way than we can sense the world. So said Swami Vivekananda of Sri Ramakrishna. Ramakrishna as We Saw Him is a collection of writings by 45 persons who actually knew him in one capacity or another: his wife Sri Sarada Devi, monastic disciples, friends, even acquaintances who had met him only a few times. No matter in what category the writer falls, each makes it very clear that Ramakrishna could, by his very presence, affect fundamental change in a person s spiritual life. --Booklist

What this book serves is to show, as close as we can after the fact, what it was like to actually be around this unique man, to talk to him, to serve him food, to play with him, to sing and dance with him, to worship him, to cry with him, to celebrate God with him. Indeed, the feeling of spiritual joy is so strong here that, though he died from cancer of the throat, the life of Sri Ramakrishna seems to be the ultimate happy movie, a true story of perfect love and bliss many times more beautiful than the wildest Hollywood fantasy. --Meditation Magazine

The soul of Ramakrishna comes through splendidly in these deeply felt pages. --The Book Reader

1. Ramakrishna As We Saw Him