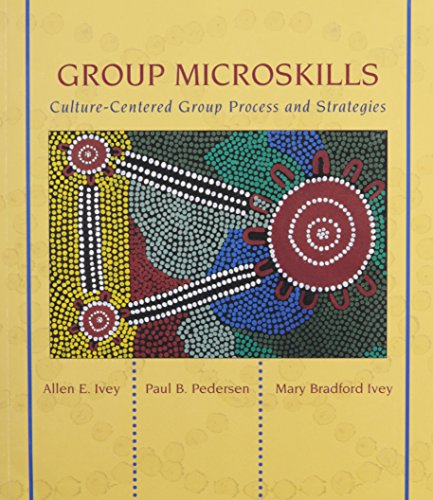 Culturally competent group leadership begins with: Communication microskills and the ability to predict group members responses,competence in multiple approaches to group process, awareness that all groupwork is multicultural, and group strategies, stages and multiple theories.

Allen E. Ivey received in Ed.D. from Harvard. He is Distinguished University Professor (Emeritus) at the University of Massachusetts, Amherst and is currently President of Microtraining Associates, an educational publishing firm. An A.B.P.P. in counseling psychology, Dr. Ivey is a past-president and Fellow of the Division of Counseling Psychology of the American Psychological Association and is been a life member of American Counseling Association. He has published over 25 books and 200 articles in his career. His works have been translated into multiple languages. Paul Pedersen's innovations in multi-cultural counseling and therapy have made immense contributions to our profession. He has served as Master Lecturer for APA, has taught throughout the world, and authored or edited 40 books on multicultural counseling. Mary Bradford Ivey has her doctorate from the University of Massachusetts and is currently Vice President of Microtraining Associates. She is a former school counselor and she received special recognition when her program was named one of the ten most effective in the United States. She has co-authored multiple books widely translated and has lectured and keynoted throughout the world.