Items related to Black Bird Fly Away: Disabled in an Able-Bodied World

Black Bird Fly Away: Disabled in an Able-Bodied World 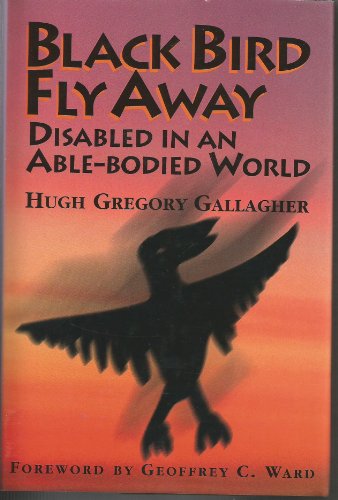 YA-Gallagher was a "young and beautiful" college student when he was struck down by polio and forced to become part of a world he had given little thought to, and when he had, it was with a certain repugnance-the world of the disabled. This unusual autobiography is a collection of writings, some previously unpublished, by a man who is recognized today as the father of the Architectural Barriers Act of 1968 and the grandfather of the Americans with Disabilities Act. He takes readers on a journey through his life, his reaction to his own disability, his public courage, and his very private desperation. The essay he wrote for his application to attend Oxford University is surely a model even today for students preparing their college-admissions essays. In public addresses, essays, and editorial pieces, he clarifies the important issues that confront disabled people and the important accommodations that have been made to help them live full and contributing lives. Gallagher is a masterful communicator. His writings of his youthful confrontation with the horrors of paralysis are powerful and poignant. The evolution of his own feelings about himself as a paraplegic and as a human being are woven throughout this thought-provoking book.
Cynthia J. Rieben, W. T. Woodson High School, Fairfax, VA
Copyright 1999 Reed Business Information, Inc.

A polio paraplegic who worked in the Johnson White House and as a Senate staffer, Gallagher was instrumental in the passage of the Architectural Barriers Act of 1968 and has written and lectured extensively on disability issues (e.g., FDR's Splendid Deception, LJ 5/1/85). Much of this volume consists of previously unpublished material, most memorably "Polio: My Account," journal entries he wrote during the first six months after he had contracted polio, and "Black Bird," an extensive description of his bout with clinical depression. Other sections are reprints of his previously published articles and texts based on lectures he has given. Gallagher discusses his physical limitations as well as the broader political, economic, and social aspects of disability in a profoundly personal tone that expresses anger but often also sarcasm, humor, and happiness. Readers will understand that the author's work for disability rights evolved directly from a combination of his thorough knowledge of the political process and his personal struggles with polio. Highly recommended for public libraries and disability studies collections.AXimena Chrisagis, Wright State Univ. Libs., Dayton, OH
Copyright 1998 Reed Business Information, Inc.

1. Black Bird Fly Away: Disabled in an Able-Bodied World

2. Black Bird Fly Away: Disabled in an Able-Bodied World