Items related to Horologion: The Daylight and Nocturnal Prayers of the...

Horologion: The Daylight and Nocturnal Prayers of the Canonical Hours 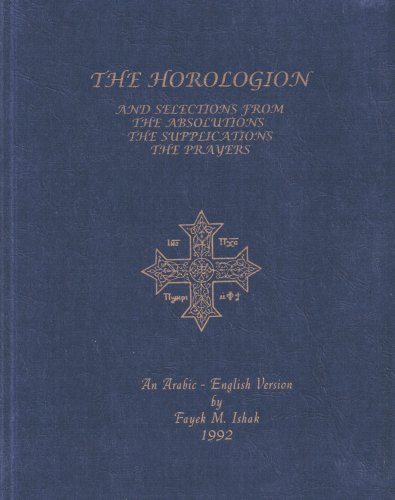 This is a bilingual edition of the Devotions, and Prayers of the Canonical Hours. Basically of monastic origin, the rich heritage of selected Psalms, Gospels, Epistles, Petitions and Absolutions that correspond to the life and Passion of our Lord, was actually incorporated into Christian worship at first by the Church of Alexandria. It was then adopted by many churches in the west particularly in France and Italy in the early decades of the 6th century A.D. Throughout the years it has become obvious that the origin of the Horologion which is deeply rooted in desert devotional supplications has kept this office of prayer and psalmody in its purest for in addition to the overall Officium of fasting, private prayer, night vigil, silence and contrition of heart.

Fayek M. Ishak was born at Godayida Sharkia and spent his childhood in the heart of the Nile Delta on a farm until he was nearly twelve years old. After passing the General Certificate of Education examination at Tewfikieh, he studied English literature at Cairo University and obtained his BA in 1945. In the same year he enrolled in the College of Education and earned its Diploma in 1947. From 1947-1952 he was a High School teacher in Sharkia and Cairo. Meanwhile he registered as an evening student in the Institute of Higher Studies in English linguistics and translation and obtained its Diploma in 1951. In 1952 he gained, through a competitive examination, a government scholarship for post-graduate studies of English literature and phonetics at the University of Exeter in England from 1952-1954. In August 1954 he was appointed Lecturer at the Higher Teachers College in Cairo. In 1959 he read for his doctorate at the University of Liverpool and obtained his PhD in Modern British Literature in 1962. In 1966 Dr. Ishak and his family emigrated to Canada. There he was appointed Assistant Professor at Notre Dame University in Nelson, BC. In 1967 he moved to Thunder Bay and joined the department of English at Lakehead University as Assistant Professor, becoming Associate Professor in 1969. He was awarded several grants from the Chancellor's Fund for research work at the Library of Congress, the British Museum Library, the Bodleian Library of Oxford and Harvard University Libraries. He was the Secretary of the English Literary Society in Cairo (1954-1959), the editor of the Teacher's College Review (1954-1959), assistant editor of the Forum (1966-1967), and co-editor of the Arts and Literary Review (1972-1973). Prof. Ishak is the author of many books including: The Series of Literary Criticism from Aristotle to the Modern Age (two volumes); The Mystical Philosophy of T. S. Eliot; and a Complete Translation of the Coptic Orthodox Service and the Liturgy of St. Basil (4th century) in Jamesian English (1611). The Coptic Orthodox Horologion: The Book of the Seven Nocturnal and Daylight Canonical Prayers. He has published a wide variety of articles in the Literary Review, the Review of Contemporary Thought, the Forum, the Orthodox Word, and Popular Archaeology. He has presented several papers at learned societies. These include Eliot and the Medieval Contemplatives at the Eleventh Conference on Medieval Studies (1976) University of Michigan. Is the Son of God the Son of God? An Inquiry into the Hypostasis (Substance) and Ousia (Essence) at the Religion and Reason Symposium (1983) Winnipeg. The Clementine Connaissance and the Hermeneutical Knowability of the Higher Gnosis of Being ; Means of Partaking of the Divinity of the Paedagogus and the Wisdom of the Protrepticus which was presented at the Thirteenth International Conference on Patristic Studies (1999) at Oxford University. A Definitive Study in Doctrinal Theology: Monophysitism versus Dyophysitism: The Authentic Substance of Miaphysitism: The Metaphysics of Eschatological Soteriology as Pertained to the Cyrillian Christology (2002) Coptologia Volume 18. He was also listed in The Directory of American Scholars (1969); The International Scholars Directory (1971); then Who's Who Among Authors and Journalists (1972); The Contemporary Author (1973); Directory of International Biography (1975); The International Authors and Writers Who's Who (1975); and Men of Achievement (1976). From 1982 to 2005 he was the President and Chief Editor of 20 volumes of Coptologia which was dedicated to Coptic Thought and Orthodox Spirituality. In 1986 Coptologia was honoured with the prestigious Centro Culturale Copto Ortodosso Gold Medal Award for scholarly distinction from Venezia, Italia by its president Abba Marcos Metropolitan of France.

1. Horologion: The Daylight and Nocturnal Prayers of the Canonical Hours