Items related to Yitzy & the G.O.L.E.M. (Yitz Berg from Pittsburgh) 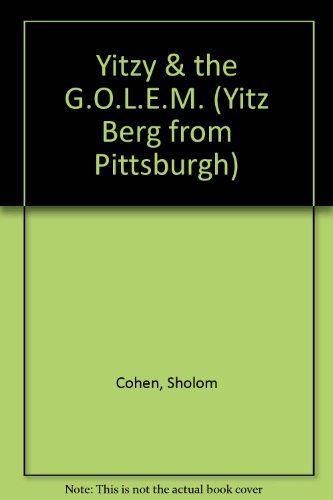 Sholom Cohen read The Hardy Boys mysteries when he was young. Good stories, he said, but as a boy growing up in a traditional Jewish household, he didn't have a lot in common with Frank and Joe Hardy. So Cohen, the father of six, decided to create stories about people like his own Squirrel Hill family. "We have a very strong Jewish home. We follow Jewish traditions very closely," he said. "I wanted to describe characters living in that atmosphere." The fictional Bergs fill the bill. They follow Jewish customs and send their children to yeshiva school. But young Yitzy - dubbed "Yitz Berg from Pittsburgh" by his classmates - gets into as many scrapes as the Hardy brothers and Nancy Drew combined. Yitzy and the G.O.L.E.M. is the first of three books Cohen plans for youngsters in fourth grade through junior high. Distributed nationwide through Jewish bookstores like Pinsker's in Squirrel Hill, it mixes typical pre-teen hijinks with a clear moral message. Yitzy is fascinated by computers, and thrilled when he wins a chance to run the school's new software package. Working on the yeshiva's newsletter is fun, but exploring other parts of the computer program is a temptation too strong to resist. Could the G.O.L.E.M. file contain an exciting computer game? Before he realizes what he's done, Yitzy sets off a chain of events that culminates in an unnerving visit from the FBI. Even worse is the punishment imposed by Rabbi Lantzman, who uses the ancient Torah - and a father-son softball game - to teach a modern lesson. Cohen's own children aren't hackers, "but I am aware of that problem with a lot of kids." Cohen said. "They try to do adventurous things, dial into networks or play tricks, without thinking about the consequences." Cohen should know. He's a software engineer at Carneige Mellon University, and his in-depth knowledge of computer systems adds a realistic touch to Yitzy's adventure. Some of the youngsters who previewed the book found the high-tech details tedious, Cohen admitted, "But I had to show how Yitzy could get so involved with technology that it distorted his sense of right and wrong." The author's older children began their schooling in the Midwest; for a time, they shared with Yitzy the frustration of being a new kid on the block. But after living in Squirrel Hill for five years, Cohen and his wife, Bryna, feel at home in Pittsburgh's Orthodox Jewish community. "So many stories with Jewish characters are set in New York City," the author said. "There is, of course, a large Jewish population there, but I really wanted to write about Pittsburgh. It has so many unique features." Readers familiar with the city's predominantly Jewish neighborhoods will recognize Murray Avenue landmarks, as well as Yitzy's school. But unless they are familiar with Hebrew terms, other details in the book may prove puzzling. "Shabbos night had been a disaster for Yitzy," one chapter begins. "He had stayed home from shul, which wasn't unusual considering the late hour of the davening during May. But he hadn't complained when his mother reminded him it was time for bed right after kiddush and ha-motzi." Such passages carry little meaning for the uninitiated, but that doesn't worry Cohen. "I tried to write the book for an audience familiar with Jewish practices and customs," he said. "I wanted to be as accurate as I could in the way Jewish people talk to one another." Working in explanations of ethnic and religious terms, he said, might be viewed as condescending by readers who share Yitzy's faith. "Since I was dealing with an editor who specializes in books for a Jewish audience, it wasn't a problem," Cohen added. "And I thought it might be informative for people interested in learning about a strictly Jewish environment. On the surface, some people may look different or behave differently, but we're all the same underneath." Cohen's next book, The Lopsided Yarmulke, will take a step back to recall Yitzy's introduction to Pittsburgh. Based on his own sons' initial reaction to the city, it will treat Squirrel Hill "almost like a character in itself," as Yitzy sets out alone to learn the name of every street and alleyway in his new neighborhood. Six children can limit a family man's writing time. While Cohen puts the finishing touches on his second novel, he's thinking ahead to the third. "I think Yitzy will take a trip to Israel," the author said. "I was there about 15 years ago. Either I'll have to again., or I'll read up on it."

Adventure books for youngsters eight to 12 seem to be difficult to find, especially when the hero or heroine is Jewish. This year that void was filled and a number of exciting, interesting books were published. This book is the first in a series and introduces the reader to Yitz Berg from Pittsburgh. The 12-year-old computer whiz finds adjustment to living in Pittsburgh after the Midwest rather hard at times as he faces the anxieties of school, community and family changes. Although Yitzy goes to a Torah academy, he's a pretty cool kid until he accidentally gets tangled into a computer mystery. Without spoiling the plot or its outcome, this book will be enjoyable for young boys, especially those interested in computers. -- Jewish World News, June 1993

Twelve year old Yitzy Berg's passion for computer games gets him in trouble with his rebbe and with the FBI! Can Yitzy convince everyone that he's not really a computer hacker? Or will his computer mania land the whole Berg family in jail? Join "Yitz Berg from Pittsburgh" in the hair-raising adventure as he tries to untangle the mystery and score the biggest victory of life! -- Book Description

Book Description Hachai Publishing. Paperback. Condition: Very Good. A copy that has been read, but remains in excellent condition. Pages are intact and are not marred by notes or highlighting, but may contain a neat previous owner name. The spine remains undamaged. At ThriftBooks, our motto is: Read More, Spend Less. Seller Inventory # G0922613508I4N00

Book Description Hachai Pubns, 1992. Condition: Good. A+ Customer service! Satisfaction Guaranteed! Book is in Used-Good condition. Pages and cover are clean and intact. Used items may not include supplementary materials such as CDs or access codes. May show signs of minor shelf wear and contain limited notes and highlighting. Seller Inventory # 0922613508-2-4

Book Description Hachai Pubns, 1992. Paperback. Condition: Good. Connecting readers with great books since 1972. Used books may not include companion materials, some shelf wear, may contain highlighting/notes, may not include cdrom or access codes. Customer service is our top priority!. Seller Inventory # S_264378538