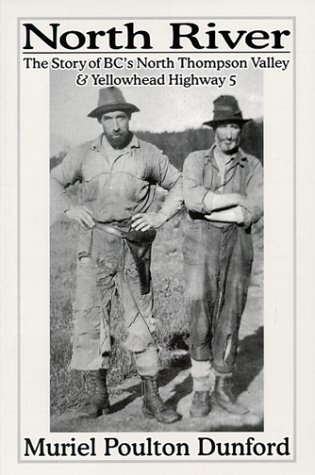 Muriel Dunfords love of the North Thompson Valley shows through as she describes the evolution of the region from the pre-contact First Nations culture to the post World War II battle against B.C.s first uranium mine. Through a lifetime of observation and nearly a decade of serious research, Dunford has uncovered a wealth of stories stories that bring history and this book to life.

Muriel Poulton Dunford has spent more than half a century in the heart of British Columbias North Thompson Valley. During this time she has gained an intimate knowledge of the pioneers of the region and their extraordinary stories.

Muriels family moved to North River in 1938 when she was a young girl. The contrast from Saskatchewan parkland to B.C. highlands moved her to write descriptions and poems for childrens pages in the Winnipeg Free Press and Kamloops Sentinel. After completing her high school education in Clearwater, she took what became a temporary leave-of-absence to further her education and start her teaching career.

She returned to the valley in 1950 when she married Ken Dunford. While launching five sons and daughters into the world, she continued her involvement with the education system. Mrs. Dunford spent two years teaching, four years as a school trustee and Cariboo College council member and two years as School District 26 board chair.

As her children grew older and more independent, Muriel began working with words on a full-time basis. She obtained her BA in English, and managed the Clearwater Public Library, a branch of the Thompson-Nicola Library System, for eighteen years. It was during this time that she began gathering tales and photographs of the North River pioneers. Occasional travel in other parts of Canada, Europe and the British Isles only sharpened her appreciation of the hills of home.

Dunfords retirement in 1992 presented a challenging opportunity to capture and frame the history of the North Thompson region. During this period, Muriel and Ken travelled much of the province tracking down the details that make this story complete.

Book Description Sonotek Pub, 2000. Condition: Good. 1st Edition. Shows some signs of wear, and may have some markings on the inside. Seller Inventory # GRP111983114

4. North River : The Story of B. C.'s North Thompson Valley and Yellowhead Highway 5

Book Description Sonotek Publishing. Paperback. Condition: Fair. A readable copy. All pages are intact, and the cover is intact. Pages can include considerable notes-in pen or highlighter-but the notes cannot obscure the text. At ThriftBooks, our motto is: Read More, Spend Less. Seller Inventory # G0929069137I5N00

Book Description Sonotek Pub, 2000. Condition: Good. A+ Customer service! Satisfaction Guaranteed! Book is in Used-Good condition. Pages and cover are clean and intact. Used items may not include supplementary materials such as CDs or access codes. May show signs of minor shelf wear and contain limited notes and highlighting. Seller Inventory # 0929069137-2-4

Book Description Sonotek Pub, 2000. Trade Paperback. Condition: Fine. First Edition. This is a fine first edition paperback copy, white spine. Inscribed by the author on the titlepage. Lots of photos, you will like the two fashion plate sourdoughs on the cover. Inscribed By Author. Seller Inventory # 058472

Book Description Paperback. Condition: Very Good. The book has been read, but is in excellent condition. Pages are intact and not marred by notes or highlighting. The spine remains undamaged. Seller Inventory # GOR009767745

Shipping: US$ 10.96
From United Kingdom to U.S.A.
Destination, rates & speeds