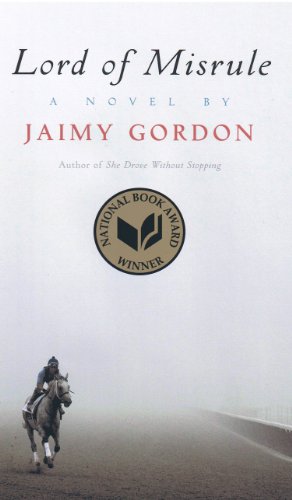 At the rock-bottom end of the sport of kings sits the ruthless and often violent world of cheap horse racing, where trainers and jockeys, grooms and hotwalkers, loan sharks and touts all struggle to take an edge, or prove their luck, or just survive. Equal parts Nathanael West, Damon Runyon and Eudora Welty, Lord of Misrule follows five characters -- scarred and lonely dreamers in the American grain -- through a year and four races at Indian Mound Downs, downriver from Wheeling, West Virginia.
Horseman Tommy Hansel has a scheme to rescue his failing stable: He'll ship four unknown but ready horses to Indian Mound Downs, run them in cheap claiming races at long odds, and then get out fast before anyone notices. The problem is, at this rundown riverfront half-mile racetrack in the Northern Panhandle, everyone notices--veteran groom Medicine Ed, Kidstuff the blacksmith, old lady "gyp" Deucey Gifford, stall superintendent Suitcase Smithers, eventually even the rulled-off "racetrack financier" Two-Twi and the ominous leading trainer, Joe Dale Bigg. But no one bothers to factor in Tommy Hansel's go-fer girlfriend, Maggie Koderer. Like the beautiful, used-up, tragic horses she comes to love, Maggie has just enough heart to wire everyone's flagging hopes back to the source of all luck.

Jaimy Gordon's third novel, Bogeywoman was on the Los Angeles Times list of Best Books for 2000. Her second novel, She Drove Without Stopping, was an American Library Association Notable Book in 1990. Gordon's short story, "A Night's Work," which shares a number of characters with Lord of Misrule, appeared in . She is the author of a novella, , and the fantasy classic novel Shamp of the City-Solo. Gordon received an Academy-Institute Award for her fiction from the American Academy of Arts and Letters. She teaches at Western Michigan University in Kalamazoo and in the Prague Summer Program for Writers.