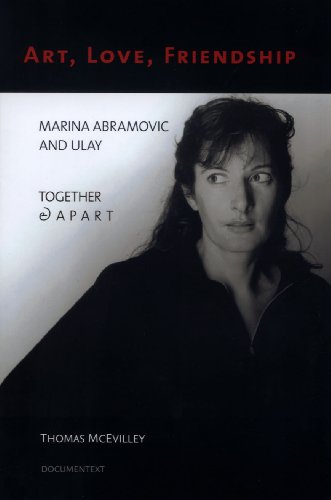 In 1975 Marina Abramovic and Uwe Laysiepen met in Amsterdam, fell in love, and began to collaborate as performance artists. By the time their personal relationship ended twelve years later they had become two of the most famous performance artists in the world. Thomas McEvilley met them in 1983; they became close friends, and ever since he has been able to follow the development of their career together, and their careers apart, over the past twenty-seven years. Art, Love Friendship is divided into three sections. The first documents Marina Abramovic and Ulay together, including their three-month-long Great Wall Walk in 1988. The second section features Ulay's career before meeting Marina -- when, for example, he briefly "stole" Germany's most famous painting in broad daylight -- as well as his later work as a conceptual photographer. The final section features a long interview with Marina and essays about her work of the 1990s and the 2000s. The book includes 65 photographs presented throughout the text, and features a dramatic opening section of "Relation Works." The book coincides with Marina Abramovic's major retrospective at New York's Museum of Modern Art.

Thomas McEvilley has written many works of art criticism, philosophy, and philology. He is also an art curator, art reviewer, and author of several works of fiction. He taught for many years at Rice University, and more recently was professor at the School of Visual Arts in New York City, where he headed the new department of Art Criticism and Writing. He lives in New York City. Recipient of many awards, including a Fulbright grant, a critic's grant from the National Endowment for the Arts, and the Frank Jewett Mather Award for Distinction in Art Criticism, given by the College Art Association. Under the Documentext imprint, McPherson & Company has previously published three volumes of Dr. McEvilley's art criticism, Art & Discontent, Art & Otherness, and The Triumph of Anti-Art: Conceptual and Perfomance Art in the Formation of Post-Modernism, all of which remain in print. His book on Yves Klein, Yves the Provocateur, is also being published in May 2010 to coincide with a major Klein exhibition at the Hirshhorn Gallery, Washington, D.C.