Items related to Are You Watching, Adolph Rupp

Are You Watching, Adolph Rupp 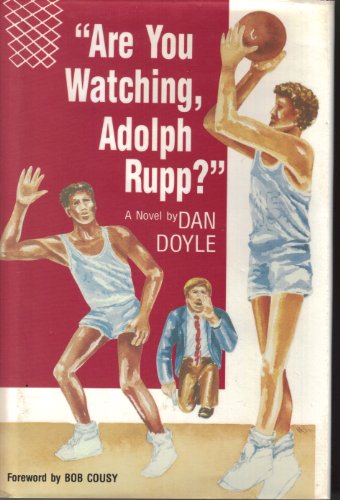 FIRST EDITION, hardcover in dust jacket. Publisher's statement: "There exists today a sinister element in sports where the love of money, success, and fame grows uncontrolled. Unfortunately, many leaders are more concerned with victories, fund raising, and personal gain than they are with developing positive character traits and physical well-being. Amateur sports wreak havoc with the values of some of our top athletes. "Are You Watching, Adolph Rupp?" explores this phenomenon with clarity and sincerity. Set in a fictional university, "State," the novel's principal character is Jack McHale, head basketball coach. Having led State to six consecutive NCAA tournaments, McHale is toppled from his "king of the hill" posture when his school makes a fateful decision. The resulting developments force him to critically analyze himself and his profession in the face of tremendous adversity..."

In this lackluster sports novel, Jack McHale is head basketball coach of State University, a once-prominent basketball school now suffocating in the shadow of the Big East Conference. Steve Ellovitch, State's overly ambitious athletic director, has given McHale a mandate: win immediately or else. If Doyle had been content to keep his story centered on these two men and their quest for a winning team, he might have written a tighter narrative. Even the recruiting scandal interpolated into the plot might not have derailed the story. However, this overlong novel spins wildly out of control, obscured by a cast of characters that includes a referee on the take, a greedy assistant coach, a power-hungry beer company executive destroyed by his son's drug arrest, a major betting scandal run by the man initially in charge of building the arena and a team which, after a 12-16 season the year before, amazingly wins college basketball's national championship. In addition to the wildly unfocused plot, the narrative is marred by cliched, pedestrian prose. Most unfortunately, Doyle never captures the feel of college basketball.
Copyright 1989 Reed Business Information, Inc.

1. Are You Watching, Adolph Rupp

2. Are You Watching, Adolph Rupp