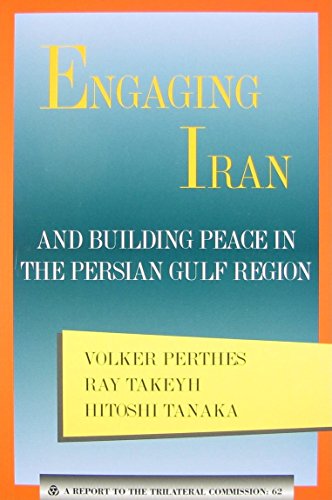 Three different perspectives on Iran's relations with its neighbors and the rest of the international community are presented in this book. Ray Takeyh's essay on Iran's place in the Greater Middle East is an historical overview of Iran's unique national narrative and Islamic pedigree. Hitoshi Tanaka adopts a comparative approach in his essay to address the challenges posed by the nuclear programs of Iran and North Korea. The extensive essay by Volker Perthes examines the issues of Iran's nuclear capacity and regional energy security that are critically important to the United States and Europe as well as East and South Asia.

Volker Perthes is chairman and director of the German Institute for International and Security Affairs. His most recent book is Oriental Promenades: The New and Middle East in Flux (Siedler, 2007). Ray Takeyh is a senior fellow for Middle Eastern studies at the Council on Foreign Relations. He is the author of Hidden Iran: Paradox and Power in the Islamic Republic (Times Books, 2006). Hitoshi Tanaka is a senior fellow at the Japan Center for International Exchange and former deputy minister for foreign affairs of Japan.