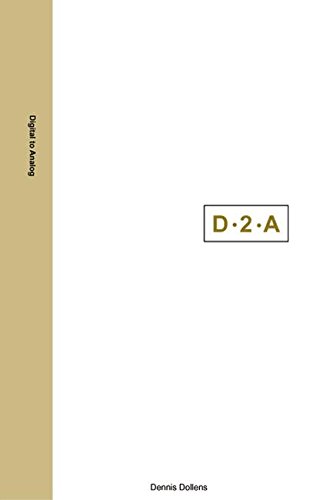 Assembling a framework derived from Borges, T. S. Eliot, and Louis Sullivan, D2A reflects on current architectural works as they illuminate the past and present, demonstrating digital architecture’s position in a historical continuum.

Presenting Gehry and the historic Catalan architect, Jujol, in a fictional exchange, D2A next observes Miralles, Calatrava, Vasulka, and Ito as pioneers across the turn of the 20th into the 21st century as well as across the digital divide. D2A then concentrates on architects who formulate digital strategies based on differing qualities and capabilities of software, thereby illustrating conditions from which digital architecture emerges.

Looking to current research—including a view to e-space and online worlds as they emerge electronically in game space and physically in places such as Las Vegas, D2A focuses on architecture and research that bypasses traditional means of conceptualization and production to visualize and produce projects electronically, as seeded by technology, science, expropriated history, and new as well as established theory.

D2A closes with a series of eleven case studies contemplating architects Duncan Brown, Greg Lynn, Objectile, and Marcos Novak as creators whose partnerships with electronics seek to designate e-space as a site of new architecture, a new workplace for full production and/or new philosophical understanding of place, building, visualization, and design.

Dennis Dollens is an architectural critic whose TumbleTruss Project has been exhibited in one-man shows in Santa Fe, Albuquerque, and Barcelona. He is the founding editor of SITES and SITES OnLine. His publications include "Exodesic," "The TumbleTruss Project," "Jujol: Five Major Buildings," and "New York, Nomadic Design." Dollens co-directed the Santa Fe Art Institu

Dennis Dollens is a research designer and writer living in Santa Fe, NM. He has taught in the Genetic Architecture Program at the Universitat Internacional de Catalunya in Barcelona. His most recent book is "DBA: Digital-Botanic Architecture."