Items related to Subjectivity and Objectivity: Further Aspects of Psychologic... 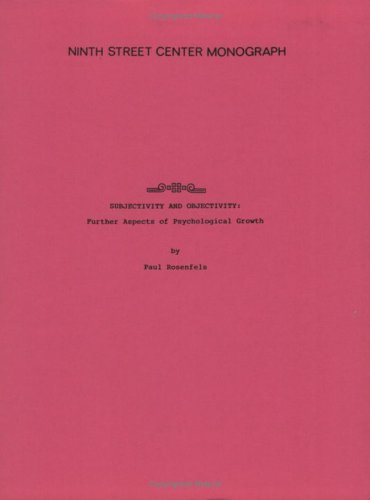 Paul Rosenfels was the first American social scientist to defend homosexuality in print as a valid lifestyle. He is also known for having made a conscientious lifelong effort to develop the foundations of a "science of human nature."

Highlights of his career: M.D., Rush Medical College, Chicago; diplomate of the American Board of Psychiatry and Neurology, and Institute for Psychoanalysis, Chicago; Lt. Colonel, Medical Corps, World War II; Assistant Professor of Psychiatry, University of Chicago; Chief Psychiatrist, Reception-Guidance Center of the Department of Corrections, State of California; Chief of the Outpatient Clinic, Forest Hospital, Des Plaines, Illinois; and extensive private psychiatric practice. From 1962 to 1985 he lived in New York City's East Village and specialized in the psychotherapy of homosexuals with special emphasis on the problems of creative self-expression.