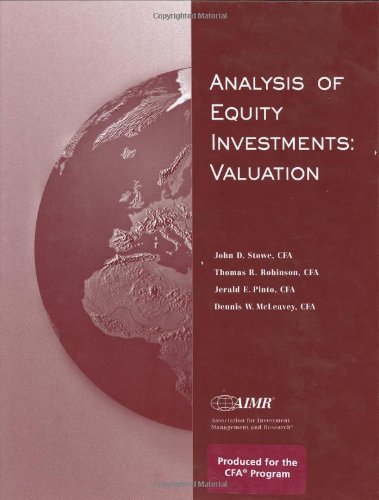 AIMR, the Association for Investment Management and Research, has published this volume for the undergraduate and graduate level classroom, particularly as part of the Chartered Certified Financial Analyst Program. The chapters describe the equity valuation process, the John Burr Williams dividend discount model (DDM), modification of this model to a free cash flow approach, Graham and Dodd concepts of earning power and market multiples, momentum analysis, and residual income models, among other topics. Annotation c. Book News, Inc., Portland, OR (booknews.com)

John D. Stowe, Ph.D., CFA is a Professor of Finance and Associate Dean at the University of Missouri-Columbia where he teaches investments and corporate finance. He earned the CFA charter in 1995. He has served on the Candidate Curriculum Committee, the Council of Examiners, and in other voluntary roles at AIMR, and is a member of the Saint Louis Society of Financial Analysts. He has won several teaching awards and has published frequently in academic and professional journals in finance. He is a co-author of a college-level textbook in corporate finance. He earned his B.A. from Centenary College and his Ph.D. in economics from the University of Houston.

Thomas R. Robinson, Ph.D., CPA, CFP, CFA is an Associate Professor of Accounting at the University of Miami where he primarily teaches Financial Statement Analysis. Professor Robinson received his B.A. in economics from the University of Pennsylvania and Master of Accountancy from Case Western Reserve University. He practiced public accounting for ten years prior to earning his Ph.D. in accounting with a minor in finance from Case Western Reserve University. He has won several teaching awards and has published regularly in academic and professional journals. He is currently Senior Investment Consultant for Earl M. Foster Associates, a private investment management firm in Miami, and previously served as a consultant on financial statement analysis and valuation issues. Professor Robinson is active locally and nationally with AIMR and has served on several committees including AIMR’s Financial Accounting Policy Committee. He is past president and a current board member of the Miami Society of Financial Analysts.

Jerald E. Pinto, CFA, as principal of TRM Services, consults to corporations, foundations, and partnerships in investment planning, portfolio analysis, and quantitative analysis. Mr. Pinto previously taught finance at the NYU Stern School of Business after working in the banking and investment industries in New York City. He is a co-author of AIMR’s text, Quantitative Methods for Investment Analysis. He holds an MBA from Baruch College and a Ph.D. in finance from the Stern School. During the writing of this book, Mr. Pinto was a Visiting Scholar at AIMR.

Dennis W. McLeavey, CFA is a Vice President in the Curriculum and Examinations Department at AIMR. He earned his CFA charter in 1990. During the early 1990s, he taught in the Boston University and the Boston Security Analysts’ CFA review programs. He subsequently served on the AIMR Council of Examiners and is now responsible for new curriculum development at AIMR. He is a co-author of AIMR’s text, Quantitative Methods for Investment Analysis. After studying economics for his bachelor’s degree at the University of Western Ontario in 1968, he completed a doctorate in production management and industrial engineering at Indiana University in 1972.

(Foreword) George H. Troughton, Ph.D., CFA is a Professor of Finance at California State University, Chico. He was formerly Professor of Finance at Babson College in Wellesley, MA. He has also worked as an equity analyst at Lehman Brothers and Scudder, Stevens and Clark. He has served in numerous capacities at AIMR including the Candidate Curriculum Committee, the Council of Examiners, and the Editorial Board of The CFA Digest. In 1999 he was recipient of the C. Stewart Sheppard Award for the advancement of education in the investment profession. Professor Troughton holds an AB from Brown University, an MBA from Columbia University, and a Ph.D. in finance from the University of Massachusetts-Amherst.