Items related to The Guests Go in To Supper: John Cage, Robert Ashley,... 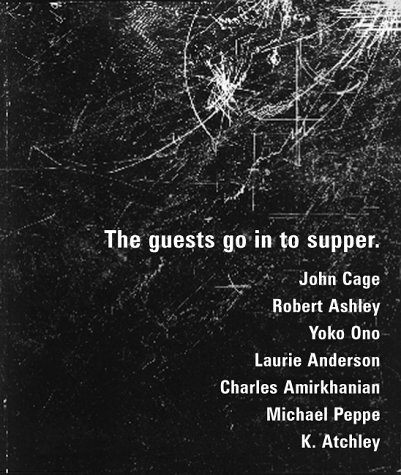 Music. Designated by the NEA in 1987 as one of the "best independent press books of the year," this book is compilation of the texts, scores, and ideas of seven American composers who use words as an integral part of their compositions. Each chapter includes a text in the form of libretto or lyrics, often with complete score. Also included are interviews with each composer about her or his ideas on music, daily life, consciousness, the future, and possibilities. "If you buy only one book on the contemporary, experimental performing arts, this is unquestionably the one to get"--Dean Suzuki, Option Magazine.

The Guests go in to Supper was designated by the NEA in 1987 as one of the best independent press books of the year.

The following are excerpts from the seven interviews . . .

John Cage: We should study the ways of industry. In order to, ourselves, behave globally, as industry behaves. They do it out of greed. We should do it out of the desire to make the house we live in, which is the whole place, in good working order.

Robert Ashley: Its okay to sit in your room and listen to a record over and over again when youre fifteen, but if you do that when you are forty, people think you are crazy. But the funny thing is that weve actually allowed ourselves that free time for television.

Yoko Ono: Somehow all the things that come out of me like words or music or whatever seem to be not my doing. It just comes in and I immediately write it down. I dont think of it as talent necessarily. I think of it like a good radio.

Laurie Anderson: As these two life forms human and machine begin to merge a little bit, were talking about technology really as a kind of new nature, something to measure ourselves against, and to make rules from, and also to investigate.

Charles Amirkhanian: I started using the counterpoint of rhythms in different layers so that you would have percussion points made out of words bouncing around against each other, and that fascinated me, that you could get this propulsion going with language that wasnt going anywhere.

Michael Peppe: I think art solves the two basic problems of existence: the fear of death and the fear of life.

K. Atchley: Opera, and music generally, can evoke attitudes, emotions, memories, regions of experience, and states of mind that we may not usually carry with us.

5. THE GUESTS GO IN TO SUPPER: JOHN