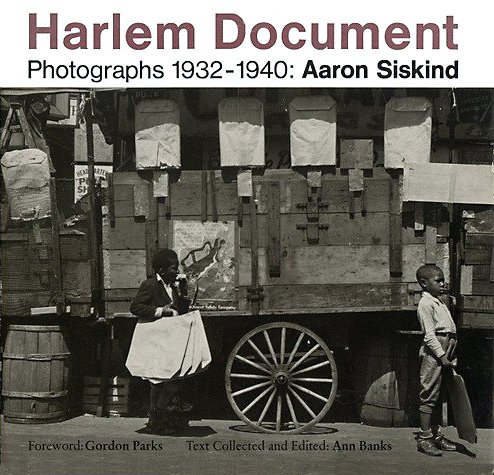 Aaron Siskind, then part of the Photo League, and the writer Michael Carter started a project in 1932 documenting life in Harlem. They worked on it for three years and put a book proposal together but it was never published. In 1939, as part of the Federal Writers Project of the WPA, Ralph Ellison recorded the oral histories of many residents of Harlem. Later, in 1940, Siskind, Carter and Max Yavno again attempted to bring the reality of life in that section of New York City to a broad audience. The war brought the project to a halt. This book presents photographs from Siskind's two projects with Ellison's oral histories of nine individuals living in Harlem at the time. Photographs by Aaron Siskind; foreword by Gordon Parks; text from the Federal Writers Project, edited by Ann Banks. 80 pages; 53 duo-toned b&w photos; 8.25 x 8 inches.

Book Description Matrix Publications, Incorporated. Hardcover. Condition: Good. A copy that has been read, but remains in clean condition. All pages are intact, and the cover is intact. The spine may show signs of wear. Pages can include limited notes and highlighting, and the copy can include previous owner inscriptions. At ThriftBooks, our motto is: Read More, Spend Less. Seller Inventory # G0936554061I3N00

Book Description Matrix Pubns, 1981. Condition: Good. A+ Customer service! Satisfaction Guaranteed! Book is in Used-Good condition. Pages and cover are clean and intact. Used items may not include supplementary materials such as CDs or access codes. May show signs of minor shelf wear and contain limited notes and highlighting. Seller Inventory # 0936554061-2-4

Book Description Matrix Publication, Providence, RI, 1981. First edition. Small oblong hardcover. Foreword by Gordon Parks. Includes text from Federal Writers Project edited by Ann Banks. While Siskind is perhaps best known for his abstract photographs he also took number of powerful images of Harlem. A near fine copy in blue cloth binding with some minor fading to the edges of the boards in a very good plus dust jacket that has a few edge tears, minor edge wear and some light soiling to the edges. Still, a nice copy of the much less common cloth version. Seller Inventory # 156016