Items related to Paul, Man of the Millennia

Paul, Man of the Millennia 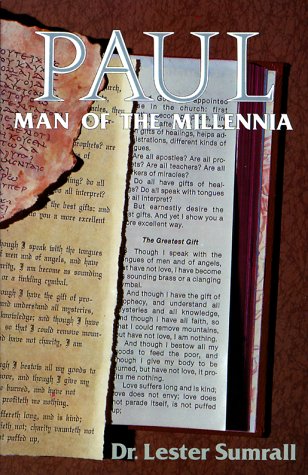 Paul was more than a "man of the hour." He was more than a "man of the year" or even "man of the century." His greatness has propelled him through two millennia into our present day. Paul did not appear great at first. A dark cloud surrounded him, but he came out of that misery, out of the darkness, and he began to shine. His light shines brighter today than it did 2,000 years ago when he walked the earth. His life reveals the secret of greatness. True greatness is within the grasp of every one of us. Study with Dr. Lester Sumrall as he shows us the attributes of greatness which characterized Paul.

1. Paul : Man of the Millennia

Book Description Sumrall Publishing. Paperback. Condition: Good. A copy that has been read, but remains in clean condition. All pages are intact, and the cover is intact. The spine may show signs of wear. Pages can include limited notes and highlighting, and the copy can include previous owner inscriptions. At ThriftBooks, our motto is: Read More, Spend Less. Seller Inventory # G0937580325I3N00

2. Paul, Man of the Millennia

Book Description Sumrall Publishing, 1990. Condition: Good. A+ Customer service! Satisfaction Guaranteed! Book is in Used-Good condition. Pages and cover are clean and intact. Used items may not include supplementary materials such as CDs or access codes. May show signs of minor shelf wear and contain limited notes and highlighting. Seller Inventory # 0937580325-2-4