Items related to Edge of Tomorrow 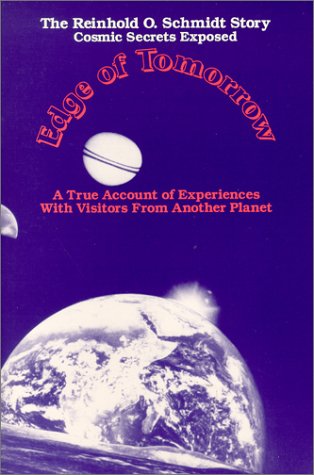 SPACE BEINGS VIEW THE PAST AND FUTURE

Here is one of the first stories told in modern times of a voyage by a Nebraska grain buyer aboard a flying saucer and his subsequent meetings with extraterrestrials. One of the earliest of "contactees," the author actually passed with flying colors a lie detector test. On the ship, he learned about the secrets of the pyramids and how the aliens have established underwter bases near the Arctic Circle. Now deceased, Schmidt was a controversial character during his life. He had several run ins with the law because of his involvement with UFOs and was praised by some and condemned by others who could not feel it in their heart to believe his story. Now you can have the opportunity to decide for yourself.

Book Description Inner Light - Global Communications. Paperback. Condition: Good. A copy that has been read, but remains in clean condition. All pages are intact, and the cover is intact. The spine may show signs of wear. Pages can include limited notes and highlighting, and the copy can include previous owner inscriptions. At ThriftBooks, our motto is: Read More, Spend Less. Seller Inventory # G0938294946I3N00

Book Description Inner Light - Global Communica, 1975. Condition: Good. A+ Customer service! Satisfaction Guaranteed! Book is in Used-Good condition. Pages and cover are clean and intact. Used items may not include supplementary materials such as CDs or access codes. May show signs of minor shelf wear and contain limited notes and highlighting. Seller Inventory # 0938294946-2-4