Items related to Word of Mouth: A Guide to Commercial Voice-Over Excellence

Word of Mouth: A Guide to Commercial Voice-Over Excellence 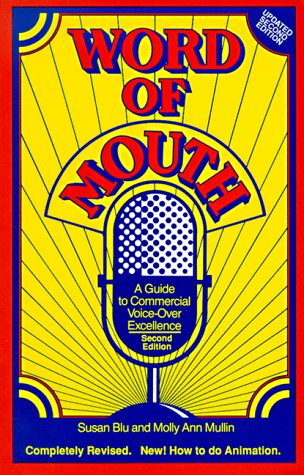 This title includes a book and CD. The art of voice-over is the backbone of commercials, animation, documentaries, and radio dramas produced for both national and local markets throughout the country. It is an ever-growing, lucrative field, and the demand for well-trained voice-over artists is increasing rapidly in our age of digital entertainment. Now in its updated and revised third edition - this is the primary instructional book in the voice-over field.A clearly written and practical primer for the beginner and a welcome refresher course for the professional, "Word of Mouth" contains voice-over exercises, sample copy, and essential advice about producing a demo, auditioning, self-promoting, getting an agent, and what to expect on the job. It also provides exclusive and up-to-date lists of voice-over agents, coaches, workshops, and demo producers and duplicators. It is the standard text for numerous university communications, television, and acting department courses. The book is accompanied by a 50-minute audio CD that demonstrates various techniques and styles of animation and commercial voice-over performed by ten top voice-over artists.

"What quickly becomes apparent when you are in a Susan Blu session is that she has a better voice and greater skill than you. So the fact that she is beloved by actors is a true testament to her directing chops and her generous spirit."—William H. Macy

"Sue is a voice-actor’s dream! She has a way of helping you pull things out of your voice that you didn’t know were there."—Wayne Brady

"Sue Blu is the real deal. She directs with respect, humor, and the greatest timing on earth. I know because she directed me towards two daytime Emmy nominations, and I love her." —Henry Winkler

"Sue has great honesty that is brought to her work; it clearly brings her directing and teaching skills to a higher level. Voice-overs have always been her passion. She has the ability to understand all the nuances of character and animation. She instantly knows how to bring life and personality to a character’s voice through amazing and helpful exercises. I hope you get as much out of this book as I have." —Lucy Liu

Susan Blu is a veteran stage and screen actor who has done hundreds of commercial voice-overs. Recognized as one of the foremost voice-over artists and animation directors, her animation credits include The Land Before Time, Spider-Man, Curious George, Superman, The Magic School Bus, Stuart Little, and hundreds more. She teaches both commercial and animation voice-over in workshops throughout the U.S and Canada. Molly Ann Mullin is a professional writer who has penned more than 20 plays for radio, television, and stage, and has won several national awards for dramatic and comedy writing. She is a member of the Dramatists Guild and a past President of the NBC Writers Workshop. Cynthia Songé is an actress, writer, and voice-over artist/instructor.

Word of Mouth: A Guide to Commercial Voice-Over Excellence

WORD OF MOUTH: A GUIDE TO COMMER