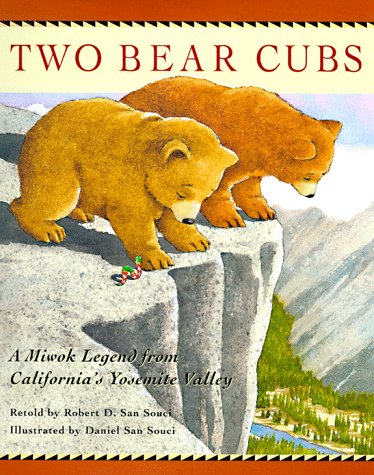 Robert D. San Souci (1946 – 2014) was a native of California and worked with illustrators from all across the country to create children's books, but his favorite illustrator and collaborator was his brother, Daniel San Souci. They published twelve books together. He passed away in December 2014.
Daniel San Souci was born in San Francisco and grew up across the bay in Berkeley, California. In 1978 he started a career in book illustration. He has published over 80 books and created many book covers which include wildlife and national park titles. He lives in Oakland, CA.

Ages 5^-9. In this retelling of a Miwok Indian legend about the huge granite rock formation at Yosemite known as El Capitan, two bear cubs go for a romp and become so tired they fall asleep on a rock. They don't even wake up when the rock begins to grow. When Mother Grizzly goes searching for the cubs, all the animals she encounters try to help her. Red-tailed Hawk finally spots the cubs on top of the mountain, but it isn't until the most insignificant of creatures, the measuring worm, tries to make the climb that the cubs are rescued. The two cubs are endearing fellows, and although it looks odd for the animal characters to be dressed in traditional Miwok garb, a note explains that the Miwok believe their early ancestors had animal forms. There's a careless spelling error in the text (contined for continued), but the excellent background notes on the Miwok and the story of the small, triumphant worm make this a fine purchase for most libraries. Susan Dove Lempke