Items related to Returning to Health: With Dance, Movement & Imagery 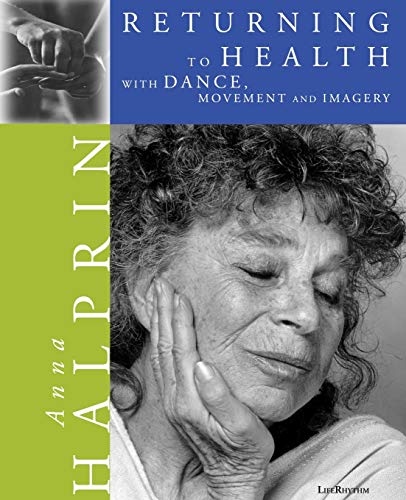 Anna Halprin offers the wisdom of her life experience as a dancer, teacher and facilitator for healing. She tells her own story as a cancer survivor, and the stories of others, with deep compassion and clarity. This is a guide to understanding the emotional processes of a health crisis, with clear guidelines for how to work with these insights.

Anna Halprin is a pioneer in the field of dance as a healing art and has been teaching and performing with people with cancer, AIDS, and other lifle threatening illnesses for the past fifteen years. She is co-founder of the Tamalpa Institute in Kentfield, California and the founder of the San Francisco Dancer's Workshop. Her numerous awards include the prestigious American Dance Festival Award for Lifetime Achievement in Modern Dance. She teaches in her Mountain Home Studio in Kentfield, California and tours the U.S.A. and abroad. She is the author of Moving Toward Life, Movement Ritual and the Circle the Earth Manual.

I was born in Winnetka, Illinois in 1920. I have danced for as long as I can remember, and I have also had cancer and survived. So in 1980 when my friend asked me to offer a movement and dance session for people living with cancer, I did not hesitate to say yes. Turning to dance as a healing art had helped me, and healed me, and taught me some of the greatest lessons of my life. I remembered my own struggle with cancer and was happy to have a chance to share what I had learned with other people experiencing the same illness.

Dance as a healing art is traditional in many non-Western cultures, but this application of dance has been obscured and ignored in the Western world. At the time I began I didn't know why dance healed, I only knew that it did. The ways I had used dance in my own healing process were derived from a largely intuitive source, so I knew if I wanted this work to be useful to others, I would have to find simple and direct road maps to lead the way. This book is about some of the maps I have discovered so far, and how I have applied them in practice.

Healing is intrinsic to one's outlook on life. Someone with a strong will to live, someone who is willing to believe in the power of movement, someone who is determined and will not give up has a better chance of surviving cancer than someone who blindly follows the advice of doctors and does not participate in her own healing. People who take an active role in relationship to their doctors, who consider many factors, including diet,prayer, existing complementary therapies and lifestyle itself, have a better rate of survival. People who survive cancer often have a creative and holistic approach to living, and a sense of adventure. I have found it inspiring to teach people who have this attitude.

When you think of dance and movement do you think of ballet, a modern or jazz dance, or some other form of stylized movement? Many people are shy about dance because of this association. This is not the way I think of dance movement at all. Dance can be approached as a direct and natural way to move without any personalized aesthetics imposed from an outside authority. Dance is not necessarily graceful, pretty, or spectacular. Dance can be grotesque, ugly, clumsy, funny, frightening, and conflicted. It can stomp, fall, attack, clutch and reach. It can open, close, tip-toe, crawl, twist, turn, pound, jump, run or skip. We can move together or alone. We can move backwards, sideways, up and down. Movement s happening everywhere all the time. It is the motion of our cells, the pulse of our blood, the rhythm of our breath. It is, as well, the ocean waves rising and falling and the alternating patterns of night and day. Movement is life and movement is the source of dance. Any body, no matter how old or young, in whatever physical condition, has a capacity to move, even if it is just your little finger or a movement carried as an image in your mind's eye.

A woman in the advanced stages of cancer shared an experience in class which illustrates this point. She said she had just gotten an audio tape I sent her of guided movements. She wanted to follow it but felt unable to move because she was so weak. She told us she put it on anyway, and just moved her eyes and her hands. She had a deep experience. I know a man who was in a brutal automobile accident and lay in a hospital bed for months in a cast up to his neck. A healer came to visit him every day and guided him through imaginary kinesthetic activities, such as walking along the beach, or riding a bicycle. In his mind, he went hiking and swimming. He rode a horse and played tennis. They did this for months. In defiance of his doctor's prediction that he would not walk again, when the cast was removed he threw his legs over the side of the bed, stood up, unsteady but determined, and he walked. Movement can exist in the mind's eye and have a powerful effect. No matter what physical condition a person is in, it is important to remember that there is still a possible connection to movement.

This approach to teaching movement is based on the belief that when we begin to use the language of movement rather than the language of words, a different kind of image and emotion arises, which bypasses the controlling and censoring mind. Words label what we already know; expressive movement reveals the unknown. Sensations, feelings, emotions, and images that have been long buried in our bodies are revealed through movement. This is also useful for shifting old patterns, habits, and destructive belief systems. In this book, I will describe some of the methods and activities that help participants enter into a dance that can lead them to a personal transformation.

Returning to Health : With Dance, Movement and Imagery

Returning to Health: With Dance, Movement and Imagery (Paperback or Softback)

Return to Health: with Dance, Movement and Imagery (Paperback)

Book Description Paperback. Condition: New. Language: English. Brand new Book. Anna Halprin offers the wisdom of her life experience as a dancer, teacher and facilitator for healing. She tells her own story as a cancer survivor, and the stories of others, with deep compassion and clarity. This is a guide to understanding the emotional processes of a health crisis, with clear guidelines for how to work with these insights. Seller Inventory # APC9780940795228