John Lucht Rites of Passage at $100,000 to $1 Million+: Your Insider's Lifetime Guide to Executive Job-Changing and Faster Career Progress in the 21st Century

Rites of Passage at $100,000 to $1 Million+: Your Insider's Lifetime Guide to Executive Job-Changing and Faster Career Progress in the 21st Century 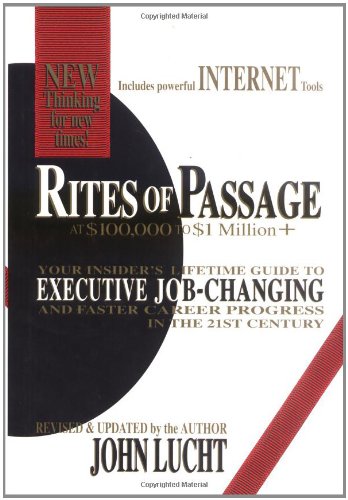 Unrevised since 1993, this #1 bestseller in its field is totally rewritten for a new era. The Internet is now a central theme!Every year since it first appeared in 1988, John Lucht's Rites of Passage at $100,000+ has been America's bestselling executive career guide. With the mushrooming importance of the Internet, Lucht rips apart his revered classic to bring it startlingly into the twenty-first century! Lucht's New Thinking merges his adroit handling of top executive recruiters (selected and honored in Rites for the past decade) with the incredible communicating power of the Internet. Add to the mix a brand-new $350,000 Internet site, RiteSite.com, which Lucht will open on the pub date of Rites to help readers use the principles in Rites, and you have a unique publishing event that befits a new technology and a new millennium. The last rewrite and relaunch of Rites in '93 attracted media attention and was a major sales success. Expect far more excitement and even bigger sales this time!

John Lucht, an executive recruiter during the past three decades for some of America's top corporations, knows what it takes to snag a new six-figure job. Rites of Passage at $100,000 to $1 Million+ is his newly revised guide to the ins and outs of a search for a job that ends in success. It promises a "comprehensive cram course in accelerating your career"--a contemporary corporate equivalent of the traditional initiation into adulthood from which it takes its title--updated for the cyber-age. And it delivers, with Lucht offering inside tips on the basic routes to a new executive-level position: personal contacts (i.e., "ask for a reference instead of a job"); networking ("never fail to get into the office of anyone whose name is mentioned to you, never depart with less than three new names"); executive recruiters ("understand their hidden financial arrangements"); direct mail ("write to the CEO or a person two levels above your target job"); and the Internet ("insert plenty of the right 'keywords' so that the computer will find your resume"). Extensive online references are also included throughout, and the material is presented in a way that's easy to understand and implement. --Howard Rothman

One of America's best-known executive recruiters for twenty-eight years, John Lucht is also one of America's most successful and highest-paid executive outplacement consultants and career coaches. He lives in New York City and is also the author of the Executive Job-Changing Workbook.

1. Rites of Passage at $100,000 to $1 Million+: Your Insider's Lifetime Guide to Executive Job-Changing and Faster Career Progress in the 21st Century