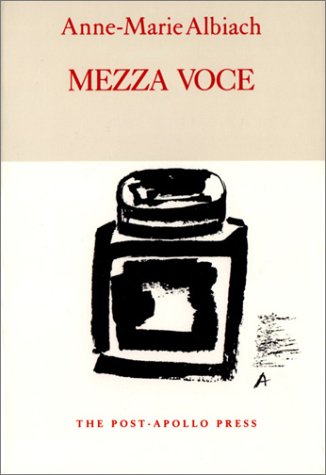 Poetry. Translated from the French by Josef Simas, with Lydia Davis, Anthony Barnett and Douglas Oliver. "There is no other poetry like this in the world. Even at its most difficult, its passions are mesmerizing. It is a great triumph to have carried these extraordinary pages into the English language."—Paul Auster

"Here is the poet for whom the voice itself rings in its silent echo, reaching ever farther into the constancy of reflection, ever further into something unknown, unknowable, frightening...."—Gale Nelson

"It is a book of fourteen poems...which seem to be a meditation on an already-distanced interior drama, a kind of passion both in the sensual and in the suffering senses."—Rachel Blau DuPlessis

Anne-Marie Albiach (1937-2012) was a French poet and translator. With Claude Royet-Journoud and Michel Couturier, she co-edited the magazine Siécle a mains, where she first published her translation of Louis Zukofsky's "A"-9. Her English publications include FIGURED IMAGE (The Post-Apollo Press, 2006), A GEOMETRY (Burning Deck, 1998), VOCATIVE FIGURE (Allardyce, Barnett, Publishers, 1991), and État (Awede Press, 1989). She translated Poème de mémoire by Keith Waldrop in 1982.

Book Description The Post-Apollo Press, 1988. Condition: Good. A+ Customer service! Satisfaction Guaranteed! Book is in Used-Good condition. Pages and cover are clean and intact. Used items may not include supplementary materials such as CDs or access codes. May show signs of minor shelf wear and contain limited notes and highlighting. Seller Inventory # 0942996119-2-4

Book Description The Post-Apollo Press, 1988. Paperback. Condition: VERY GOOD. Pages are intact and are not marred by notes or highlighting, but may contain a neat previous owner name. The spine remains undamaged. Seller Inventory # 0942996119_abe_vg

Book Description The Post-Apollo Press, 1988. Paperback. Condition: GOOD. Has little wear to the cover and pages. Contains some markings such as highlighting and writing. Seller Inventory # 0942996119_abe_gd

Book Description The Post-Apollo Press, Sausalito, CA, 1988. Paperback. Condition: Very Good Plus. FIRST EDITION IN ENGLISH. Book is in very good condition, with some very minor thumbing to first and last group of pages, and faint spotting to bottom edge. Originally published in French, and here translated to English by Joseph Simas along with Anthony Barnett, Lydia Davis, and Douglas Oliver. "After living with the French versions of the poems for many years, I was astonished to see how closely the translations by Joseph Simas and his collaborators capture the spirit of Anne-Marie Albaich's work" (From review on back of book). 161 pp. Seller Inventory # 75611

Book Description Post-Apollo Press, The. Paperback. Condition: Very Good. A copy that has been read, but remains in excellent condition. Pages are intact and are not marred by notes or highlighting, but may contain a neat previous owner name. The spine remains undamaged. At ThriftBooks, our motto is: Read More, Spend Less. Seller Inventory # G0942996119I4N00