Shakespeare's Pluralistic Concepts of Character: A Study in Dramatic Anamorphism 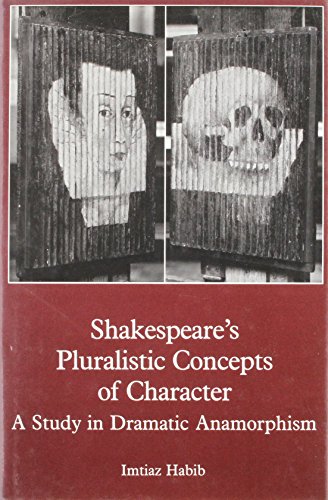 This study attempts to explore Shakespeare's approach to character in terms of techniques of subversive representation that may be connected to the Elizabethans' fondness for enigma, contradiction, and paradox - particularly of the sort found in sixteenth-century anamorphic art.
William Scrots and Nicholas Hilliard are just two Elizabethan artists who were aware of European Mannerist techniques of illusionism and trick perspectives of the variety, for instance, shown by the Dutch painter Hans Holbein during his residence in England. References to trick or curious perspectives abound in the writings of sixteenth- and seventeenth-century English poets and dramatists. They are also so numerous in Shakespeare's own plays as to make a connection between the techniques of anamorphic representation and those of his dramatic art conceivable and useful in critical terms.
The presentation of a complex character such as Shylock bears resemblance to the technique of anamorphic portraiture and trick perspective in the sense that, seen one way he appears a villain, but seen another way he appears a persecuted victim. The clashing and merging of opposed frames of ideological reference that cannot be held apart or resolved and that remain in a kind of uneasy balance may be a technique of comic characterization that exploits relativism and ambiguity in the presentation of human personality and self on stage. A similar technique can be seen at work in the Histories in the characters of Richard and Bolingbroke, who, as has long been noted, compete contrarily for the audience's ideological sympathies over the course of the play. Could this be a deliberate method of historical reconsideration that Shakespeare used in exploring Elizabethan England's medieval past, a way of understanding the problem of representing the complexities of the historical self in drama?
The enigma of self is, of course, most evident in the tragedies. The contradictions and self-interrogations of the Hamlet world are so complexly maneuvered that the play appears to be a jangle of meanings, an intricate mass of disruptive viewpoints that tend to exceed and cancel the dramatic frame in which they are set. Is this the turbulent center of the undefined self, the limit beyond which dramatic representation cannot go? Implicit failures in the dramatic representation of self may be a deliberate effect in the divisive and divided problem comedies, too, where character - both "is and is not" - and self is an entity split irrevocably between the formalism of art and the instincts of life and lost to dramatic representation. The recourse of supernatural and magical elements in the romances could signal an end to Shakespeare's explorations of character and self in dramatic art through the subversive techniques of anamorphic representation.
The problematics of the representation of self in dramatic literature has a useful bearing on understanding Shakespeare's dramatic art. This work is an attempt to formulate a rhetoric for such problematics in terms that are accessible from most points of the current critical compass.

1. Shakespeare's Pluralistic Concepts of Character: A Study in Dramatic Anamorphism

2. Shakespeare's Pluralistic Concepts of Character: A Study in Dramatic Anamorphism

3. Shakespeare's Pluralistic Concepts of Character: A Study in Dramatic Anamorphism

Book Description Susquehanna Univ Pr, 1993. Condition: Good. A+ Customer service! Satisfaction Guaranteed! Book is in Used-Good condition. Pages and cover are clean and intact. Used items may not include supplementary materials such as CDs or access codes. May show signs of minor shelf wear and contain limited notes and highlighting. Seller Inventory # 0945636377-2-4

4. Shakespeare's Pluralistic Concepts of Character: A Study in Dramatic Anamorphism