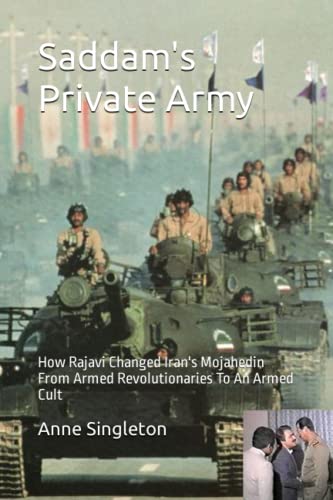 Once welcomed by the West for his aim of overthrowing the mullahs' regime in Iran the Mojahedin leader Massoud Rajavi's single minded quest for power led him to act as a mercenary for Saddam Hussein and to pervert the powerful and popular resistance movement into an armed cult. This up-to-date account and analysis of the degeneration of the Mojahedin into Saddam's Private Army is told by a Western woman who had for over twenty years unique access to their secret inner world. Contents: Preface; Introduction; 1. From Prison to Ideological Revolution (Historical Context; Rajavi's First Bid for Power; National Council of Resistance; Foreign Relations; Armed Struggle; Internal Relations; Ideological Revolution); 2. From Ideological Revolution to Cult Status (Internal Relations; Armed Struggle; Foreign Relations; Rajavi's Second Bid for Power; Internal Relations; National Council of Resistance); 3. The Mojahedin in the Present (Dissent Within the Mojahedin; Political Scene); Glossary; Bibliography

Shipping: US$ 26.86
From United Kingdom to U.S.A.
Destination, rates & speeds