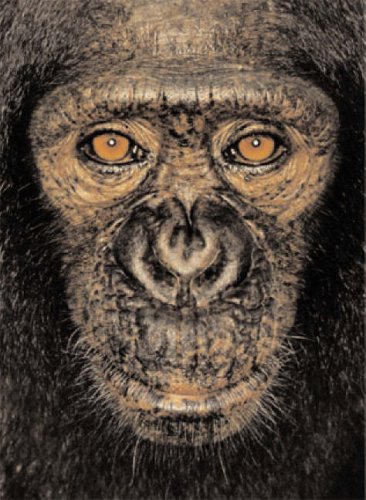 Fifty great apes--chimpanzees, gorillas, orangutans and bonobos, our closest biological relatives--are featured in this series of portraits by James Mollison. Photographed over a span of four years in seven ape sanctuaries (in Cameroon, the Democratic Republic of Congo, the Republic of Congo, Indonesia, Germany and the United States), they are mainly orphans, victims of the illicit trade in "bushmeat." Djeke, Fizi, Gregoire, James, Koto and the others are all photographed as unique individuals, in the manner of passport photographs, while representing species whose survival is under threat. Featuring case note biographies and introduced with a powerful essay by Jane Goodall, this book celebrates the great apes. The faces that look back at us also raise profound moral and scientific questions--including what it means to define ourselves "human."

'In 1859 Darwin shocked much of the world with his theory of evolution. Most people now accept the idea that we have evolved not from the modern great apes - chimpanzees, bonobos, gorillas and orangutans - but a common ancestor: a chimp-like human-like creature who lived some six to seven million years ago. Recent research has revealed startling similarities in the structure of DNA in apes and humans. We differ from chimpanzees by only about one per cent. Chimpanzees and bonobos are closer to humans than they are to gorillas. All three African great apes show more similarities to us than to orangutans.

'In most of the places where they range, the great apes face extinction within the next ten to fifteen years if we do not act to save them. There were probably close to two million chimpanzees across Africa 100 years ago. Today there are no more than 150,000. They are declining in numbers as a result of ever-growing human populations, constantly encroaching the remaining forests, fragmenting remaining habitats, setting snares and hunting. The situation is even worse for mountain gorillas and orangutans. As wild ape numbers decrease, so the population of orphans in sanctuaries is increasing. Chimpanzees, gorillas and bonobos are being hunted, along with elephants, antelopes and myriad other species, for food - and not to feed starving people, but to satisfy a taste for 'bushmeat' among the urban elite. There is not much meat on an infant ape, so often it will be sold alive, illegally, in the market beside the cut-up body of its mother.

'James Mollison's portraits are of the orphans, confiscated from illegal traders, that make up thepopulation of at least nine seven sanctuaries in Africa and Asia. Many of them have seen their mothers killed, and sometimes butchered, in front of them. Each individual ape has his or her own tragic story of pain and trauma. Each one is different. Look into the eyes of each one of them and you will sense their unique personality.

'I hope that James and Other Apes will stimulate thinking, and help people to understand better our place in nature. For many it will be a humbling experience. We are different from other animals (as they are different from each other) but not as different as we thought.'

Born in 1973 in Kenya, James Mollison studied Art and Design at Oxford Brookes University and Documentary Photography at Newport School of Art and Design in the UK. He now lives in Venice, Italy. Part of the radical and influential Italian art and design workshop 'Fabrica', his work has been widely seen in publications