Items related to Judge for Yourself: How Many are Innocent

Naylor, L.A. Judge for Yourself: How Many are Innocent

Judge for Yourself: How Many are Innocent 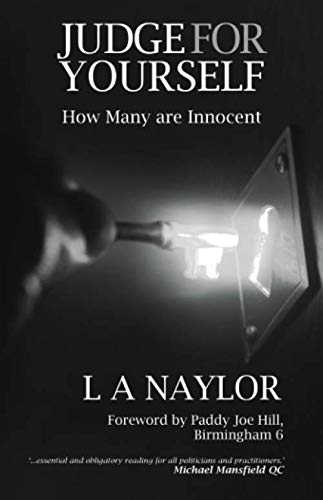 Reviews 'Anyone interested in Britain, social justice and human resilience should read this book.' -- Simon Hattenstone at The Guardian 'An extremely well-written polemic that pulls no punches.' -- Dr Michael Naughton 'This work should be essential and obligatory reading for all politicians and practitioners.' -- Michael Mansfield QCSynopsisThink you could possibly end up spending twenty years lost in the British prison system serving time for a hideous crime that you never committed? No? Think again. "Judge for Yourself" is a book that is long overdue -- a well researched lay person's guide to the British legal system's appalling number of miscarriages of justice. Even more interestingly, it is an exploration of how such mistakes are allowed to continue, and how, despite an often blatant lack of evidence against them, many people have been -- and still are -- languishing in jail for crimes they did not commit. Naylor starts from an intelligent and irrefutable premise: that any system of justice, being human-made, is prone to error. That is not, she argues, a problem per se; the problem lies in the fact that the Establishment, in its indifference, arrogance and/or incompetence, refuses to take any serious action to correct these errors and prevent them from happening in the future. Included are the vivid testimonies of six prisoners at different stages of the criminal justice system. James Baldwin once said, 'If one really wishes to see how justice is administered in a country, one does not question the lawyers, the policemen, the judges or the protected members of the middle class. One goes to the unprotected -- those who need the protection of the law the most -- and listens to their testimony.' This is precisely what Naylor has done and such startling revelations make essential reading. Nothing will seem quite the same after. This is an original piece of work that highlights a serious problem and questions the very nature of the democratic processes that govern our lives.

1. Judge for Yourself: How Many Are Innocent?