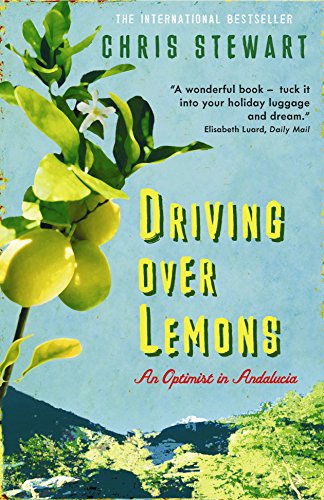 At age 17, Chris Stewart retired as the drummer of Genesis, his schoolboy band, and launched a new career as a sheep shearer and travel writer. This book describes his idyllic life on a remote mountain farm in Andalucia.

When English sheep shearer Chris Stewart (once a drummer for Genesis) bought an isolated farmhouse in the mountains outside of Granada, Spain, he was fully aware that it didn't have electricity, running water, or access to roads. But he had little idea of the headaches and hilarity that would follow (including scorpions, runaway sheep, and the former owner who won't budge). He also had no idea that his memoir about southern Spain would set a standard for literary travel writing.

This rip-roaringly funny book about seeking a place in an earthy community of peasants and shepherds gives a realistic sense of the hassles and rewards of foreign relocation. Part of its allure stems from the absence of rose-colored glasses, mainly Stewart's refusal to merely coo about the piece of heaven he's found or to portray all residents as angels. Stewart's hilarious and beautifully written passages are deep in their honest perceptions of the place and the sometimes xenophobic natives, whose reception of the newcomers ranges from warm to gruff.

After reading about struggles with dialects, animal husbandry, droughts, flooding, and such local rituals as pig slaughters and the rebuilding of bridges, you may not wish to live Chris Stewart's life. But you can't help but admire him and his wife, Ana, for digging out a niche in these far-flung mountains, for successfully befriending the denizens, and for so eloquently and comically telling the truth. The rich, vibrant, and unromanticized candor of Driving over Lemons makes it a laudable standout in a genre too often typified by laughable naiveté. --Melissa Rossi

"Fortunately, there's no shortage of can-do Brits who are willing to tough it out for the enjoyment of readers everywhere. In fact, the ability to write hilarious travelogues featuring excruciating scenes of discomfort may well be a national characteristic. It's certainly possessed by Chris Stewart, the original drummer for the rock group Genesis, who bought a hovel in Southern Spain and then wrote the beguiling Driving Over Lemons."
-- New York Times Book Review

"More than a travel book, this is a record of Stewart's slowly flourishing friendship with his neighbor, Domingo, and of how Stewart gradually sank roots deep into his beautiful Andalucian hillside.... This enchanting memoir is likely to prove popular in North America with both armchair travelers and readers who, while curious about the odd life choices others make, would just as soon give scorpions and clouds of flies a miss."
-- Publishers Weekly