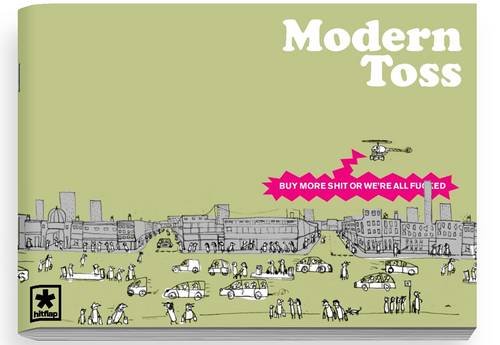 Modern Toss are satirical comic artists with a real cult following. Referred to as swearmasters and 'Offensive and hilarious at the same time,' they offer what they call 'the stink of excellence in a world gone tits up.' Issue number 5, poignantly titled Buy More Shit or We're all Fucked, features regular Modern Toss favourites such as Mr Tourette, Cheese and Wine and Alan.

The scurrilous, global cult comic Modern Toss is the work of Jon Link and Mick Bunnage. As writers, cartoonists, and animators they've taken Modern Toss in many different directions- from challenging late night television to cutting edge advertising; from international design magazines to greeting card racks; and from Gallery Exhibitions to installations. In 2014 a Kickstarter campaign for their 10th anniversary book 'A Decade in the Shithouse' became the UK's second biggest ever comic crowdfunding success, exceeding their target within 48 hours of going live. The book 'A Decade in the Shithouse' is out now. Their work features regularly in The Guardian and Private Eye magazine. It is eleven years since Modern Toss released their first comic, financed by advance orders from fans. It was to be the first in a series of eight, so far. The early ones are now highly collectable- especially Issue 2, with its free sample of royal hair. Issues 1 to 4 of the comic have been released as books by Macmillan, along with the blockbuster 'Work' book and 'All You Can Eat of Homeclubber'. They are publishing their much awaited 9th comic, 'Fucking Arseholes Anonymous' in 2016. A top notch slim volume of verse by the 'Drive By Abuser' is also available. They have also published 'More Work' , 'Best of Work' and 'Desperate Business' - a series of recession inspired cartoons for Private Eye, one of which is now part of the permanent collection at the V&A. Their first TV series, broadcast on Channel 4 in 2006, was a ground breaking mix of blunt-talking, animated characters with bizarre and surreal live action. Described as 'badly drawn, utterly foul-mouthed, mean spirited and misanthropic - also very, very funny" by the Independent on Sunday, the series won unanimous critical praise and was nominated for a Rose D'Or award in 2009. Their second series was snapped up and broadcast in the U.S. in 2009 and distributed to 30+ territories. Acclaimed sitcom 'Work Experience' was broadcast on E4 and in 2011 and 'Chaos Laboratories', a live action, sci-fi themed animation (with Paul Kaye and Simon Day) was also commissioned by BBC Online. The brilliant 'Business Mouse' cartoon went out on Channel 4 in August 2012 and picked up a Royal Television Society Award. The animated medieval spoof 'Robin of Essex' also debuted in 2012 with Channel 4 online. Later that year Channel Four commissioned five promos for their Funny Fortnight. Modern Toss have had three exhibitions at Brighton's Ink'd gallery, during which the highly collectable 'Buy More Shit Or We're All Fucked ' plastic bag, part of their inspired 'Improperganda' range, became the shopper's favourite. A celebration of their artwork took place in London's Maverick Gallery in June 2010, where their startlingly innovative 'Periodic Table of Swearing' print became an international phenomenon. Since then it has been re-imagined as an actual table, which was exhibited at Latitude festival, along with the Portrait Booth in 2011. Modern Toss returned to Somerset House Pick Me Up Design Festival in April 2012 and created the world's longest cartoon strip with the word 'fuck' in it - the 'F***yeux Tapestry'. In 2014 Modern Toss staged a unique UK exhibition, The Cistern Chapel, displaying artwork in gallery toilets, along with two live drawing events in London and Coventry. In 2014 Modern Toss also staged a major exhibition at The Forge Gallery in Shoreditch, London to celebrate their tenth anniversary; generating extensive press and media coverage. In early 2015 the BBC commissioned Modern Toss to produce The Lady And The Fly - an emotionally charged and lavish six-minute animation Voiced by Mackenzie Crook and Paul Kaye; with the epic sweep of a classic romantic melodrama - for the BBC's Funny Valentines series that was released globally on iPlayer on Valentine's Day. Later in 2015 for the BBC they also produced the hilarious How To Survive University and remarkable Orchestral Disturbance No 1 in E flat Major; both available on the iPlayer. Their social media presence has grown six fold since Sep 2013, amassing over 112,000 followers on Facebook and Twitter as well as a staunch online fanbase.