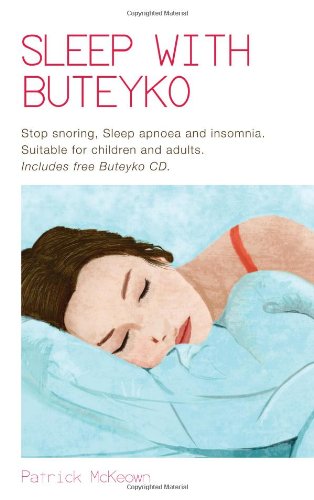 Sleep with Buteyko originates from my experience of dealing with snoring, obstructive sleep apnea, fatigue and poor concentration.It is written in conversational style, with minimum jargon. Yet, the information is well supported by medical papers and articles. I am sure you will be able to apply the exercises and guidelines from the book - to wake up refreshed within a few short days.

Breathing re-education to improve sleep and body oxygenation is something that I am very passionate about. For this reason, I have participated in TEDx talks to help improve awareness.

In 1997, I discovered the Buteyko technique as a method of correcting my own breathing problems.  Throughout my childhood and into my early twenties I constantly breathed through an open mouth.

I experienced symptoms of wheezing, breathlessness,and snoring, and was told by my university dorm-mates that I regularly stopped breathing during sleep. It was only in later years that I learned this condition to be obstructive sleep apnea - a potentially dangerous form of sleep-disordered breathing.

High school for me was a very frustrating time, as I didn't have the concentration to stay alert during class, and needed to study long hours to obtain decent grades. When a student's energy levels and concentration is poor, they will struggle to focus and perform well academically.

Some of my teachers simply considered me to be uninterested, while others gave me positive support and encouragement, but no one - not even my family doctor - suspected that I might have a sleep disorder.Like millions of other teenagers, I fell between the cracks of modern medicine.

In 1997, after graduating from Trinity College Dublin, I read an article in an Irish newspaper about the work of Russian Dr. Konstantin Buteyko. Dr Buteyko's theory emphasized the importance of two breathing habits: to breathe through the nose both day and night, and to'breathe light'.

Using the little information available at that time, I applied the Buteyko Method, and I can honestly say that within a few days it completely changed my life. My breathing was easier, my sleep improved,I felt calmer, and my energy levels vastly increased.

A number of years later I travelled to Russia to receive my clinical training at the Buteyko Clinic of Moscow. I received my accreditation from Dr Buteyko, and since 2002 have been teaching the Buteyko Method to thousands of people with breathing disorders, such as snoring and obstructive sleep apnea.

While breathing habits can change in the wrong direction, it is also possible to correct and improve the way we breathe by practising the exercises and guidance within this book, which will help you to enjoy better sleep and lifelong health.

The benefits of breathing lightly through the nose are supported by many references to medical papers and research, while the techniques and breathing exercises will help you to change your breathing habits for the better, forever.


Buteyko Clinic International is dedicated to continue the work of the Late Dr. Konstantin Buteyko, so that millions of children and adults can benefit from learning the tools to help themselves.

Listen to the breathing of someone who is snoring and you will find it to be noisy and often through the mouth. If the person has obstructive sleep apnea,you may hear a snore followed by complete silence as they stop breathing for a period of up to one minute - or sometimes more.

Both snoring and sleep apnea are forms of sleep-disordered breathing, and can be improved and corrected by practicing simple breathing exercises designed to change breathing habits both day and night.